TOP: The final rider for Cutters throws his arms up in celebration after crossing the finish line April 13, 2019, at Bill Armstrong Stadium. Little 500 is typically in April, but has been rescheduled to May 26 this year.

BOTTOM: The Kappa Delta team practices April 9 at Bill Armstrong Stadium. Only essential volunteers and riders will be allowed in the stadium for the 2021 Little 500 races May 26.

The tailgate fields are empty. The racetrack has no racers. What's known as the world’s greatest college week just won’t be the same in 2021.

The Little 500 bike race is typically during the third week of April. Now May 26, the IU Student Foundation rescheduled the race in order to avoid potential COVID-19 outbreaks while students are still on campus.

The IU Student Foundation also announced there will be no fans allowed at the race on May 26. Only essential volunteers and riders will be allowed in the stadium. Where the stadium would usually be packed with students and fans from the community, the track will only house the teams, IUSF staff and broadcast media students and professors.

The race will be available via livestream on the IU Broadcast website. The race has been available over livestream for the past five or six years, Director of the IU Student Foundation Andrea Balzano said.

“A lot of, you know, time and effort was put into that decision to produce the best possible outcome for the students who have put hours into training for this event,” Balzano said.

IUSF has and continues to partner with students and professors from the Media School to make the race viewable online, she said. Broadcasts of past races are also available on IU’s Broadcast site.

Balzano said that pre-race ceremonies will also be scaled down this year. But other spring series events such as time trials, Miss N Out and Team pursuit were run normally, she said.

With the race happening during the summer with most students away from campus, this year’s race week will likely look very different. 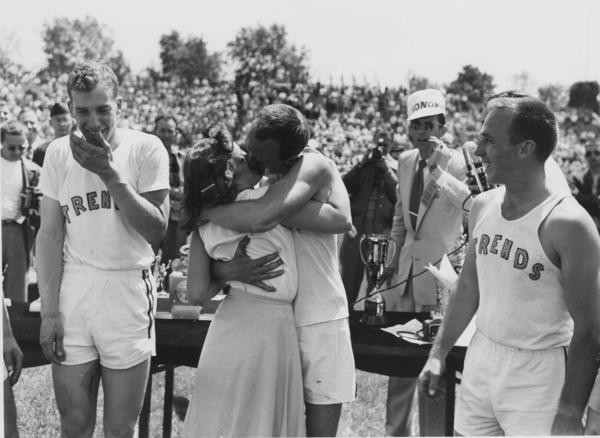 The first team to win the men's Little 500 was the South Hall Buccaneers in 1951.

A normal week for riders

For the riders, this is just a normal week. There will be no mourning of a race-to-be like last year, when the race was canceled altogether.

“It would be another story if there would have been a race and there’s no race at all,” senior Jazz Briggs, a rider for Chi Alpha, said. “I’m sure we would be all together crying.”

When the race was canceled last year, teams found ways to commemorate the race and its history. RideOn, for example, biked a century, one mile for each lap in the women’s race.

But Jess Hamilton, a senior rider for Alpha Xi Delta, said teams won’t want to do that this year. The race is still happening, just being pushed back a month, and any excessive work would throw off bikers’ training regimes.

“Last year was more upsetting, and I think most people would agree with that,” Hamilton said. “We spent the whole year training, and we were under the impression that we would have a normal race for the whole year, and then it was kinda last minute that it was pulled out from under us.”

Instead, April 24 and the week leading up to it will not be treated as anything other than another week of training.

“I feel a little bit less stressed,” Briggs said. “It probably would be a little more stressful. Our team would be meeting much more.”

Although Briggs is a senior, he’s also a rookie. Last year would’ve been his first race, so he’s still trying to determine what a normal race week routine would look like.

At most, a group of riders will spend Friday taking the same action as normal — the donut ride, a social ride where teams can interact and eat pastries.

“This week is just kind of insignificant for riders,” Hamilton said. “It’s just turning into another normal week of training, another week before the real race.”

Hamilton said her team will be at the track twice a week until the race comes.

Many students said they were disappointed the race has been postponed until May when they will be home for the summer. Especially with IU’s increase in vaccinations, some were hoping they could attend the race in person.

This year’s race has been moved to a virtual broadcast format, but some students said they were still hoping IU would’ve allowed in-person attendance, as more of the community received vaccinations.

“If students are fully vaccinated, they should be able to go to the race,” IU sophomore Leon Good said.

The race was canceled last year due to initial shutdowns due to the coronavirus pandemic. Because students were required to remain home for the rest of the previous spring semester, Good, like other sophomore students, has not attended a Little 500 race yet.

“I feel like I’m missing out on a huge part of being here,” Good said.

“If students are fully vaccinated, they should be able to go to the race. I feel like I’m missing out on a huge part of being here.”

The Little 500 race is an IU tradition, with more than 25,000 fans coming out in years past, according to the IUSF website.

“I think why a lot of students go is also for the experience, to talk to people and be involved with the student community,” IU sophomore Ismael Garcia said.

Like Good, Garcia has never attended a Little 500 race. Garcia said he heard how popular this event is to IU students and the Bloomington community even before coming to IU. He was hoping that with the roll-out of vaccinations at IU, he could still possibly attend the race this year.

“I’m definitely going to go if they have an in-person race next year,” Garcia said.

The Little 500 race has been widely called “the greatest college week in America.”

“A much more common mindset during Little 500 is to party Monday-Sunday as much as you can,” Rachel Hartog, a writer for We Are IU, wrote in 2018.

“If the weather is nice, we would expect an uptick in parties and we are preparing for that scenario with extra officers patrolling all weekend to help ensure the safety of all of our students, faculty, staff and visitors,” Bunger said.

Students have been having parties at similar rates as they were prior to the pandemic, Bunger said. Bunger said IUPD usually receives about five or six reports about partying each weekend. This has not changed since the start of the pandemic, he said.

It’s likely students will continue having parties like they would normally during the Little 500 weekend, Bunger said. 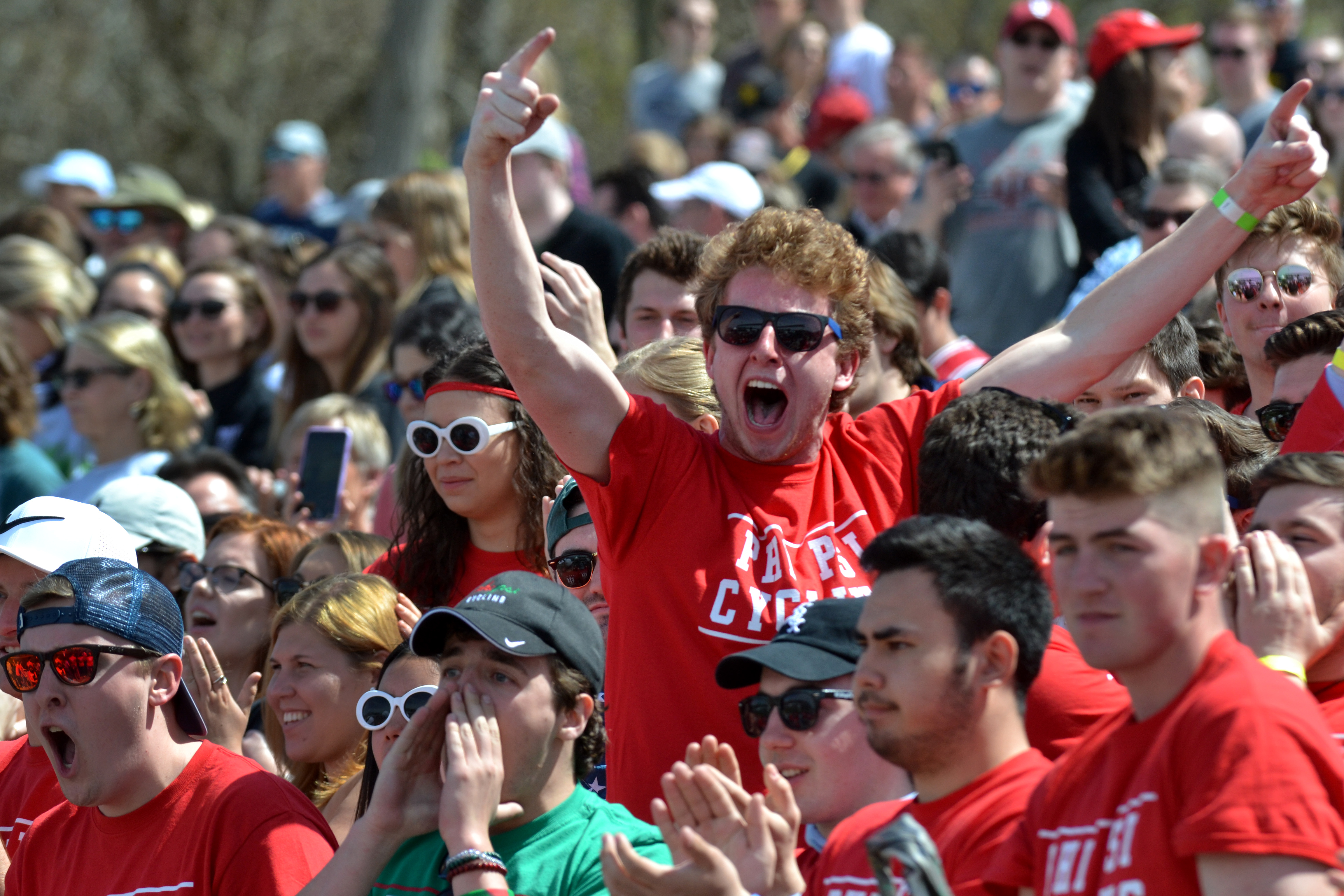 Fans of Phi Kappa Psi cheer April 13, 2019, at the men’s Little 500 at Bill Armstrong Stadium. The IU and the IU Student Foundation announced last month there will be no fans allowed at the race on May 26.

During a week usually full of tradition, Bloomington business owners and managers said they are disappointed because the week won’t bring in the same amount of business as it would in a typical year.

Pete Mikolaitis, general manager of Nick’s English Hut, said he is glad the race is still happening, but he is disappointed it will not be like a normal year. The race typically happens while most students are on campus and tourists are encouraged to visit, Mikolaitis said. He said this would bring large crowds into the restaurant throughout the whole week.

The restaurant also sponsors Team Nick’s, one of the men’s cycling teams. The team was formed in 2019 and has only participated in one race because of last year’s cancellation.

“We're lucky to at least have a race this year as opposed to last year, so we're happy that there's still a race going on because we sponsor a men's cycling team,” Mikolaitis said. “We were really happy when they decided to hold the race, but the fact that it's only being shown virtually and not having fans in the stands is kind of a bummer.”

Mikolaitis said the rescheduling will definitely not bring in the crowds Nick’s usually sees during the race week. He said he expects to see some additional business during the summer Little 500 week, but it will be nothing compared to what he expects in a normal year.

Crazy Horse owner Ron Stanhouse said bars and restaurants are suffering as many celebrations and traditions have faded away because of the pandemic.

“We have seen virtually every tradition broken and violated, and a few will be likely lost and never return,” Stanhouse said. “The year has been full of major disappointments for us.”

“We have seen virtually every tradition broken and violated... The year has been full of major disappointments for us.”

Stanhouse said Crazy Horse staff are thankful they can remain open and are excited to return to business operations after the pandemic is over.

“Bars and restaurants are bruised and beaten. We are simply glad to be open,” he said. “We are glad that the country is getting vaccinated, and we look forward to the next school year when we might have a more normal business environment.”