Story and photos by Izzy Myszak

TOP PHOTO Lucy, 8, poses for a picture with her Juvenile Diabetes Research Foundation﻿ bear in her home. She practices giving insulin injections with him.

Clean the finger, so the needle goes in nicely. Pull back the trigger. Brace for a small, sharp pain - many patients bite their tongues at this step. Push the button.

The three-step process to check blood sugar in diabetes patients isn't a complicated one. Prick your finger, watch the blood ooze out and dab it on a test strip to be checked in a glucose monitor. But it can be scary and difficult to understand for younger patients such as 8-year-old Lucy Matthews.

Her parents, Ashley and Garrett, call the process "the pokie" to make it easier on their daughter. Lucy still hates it. 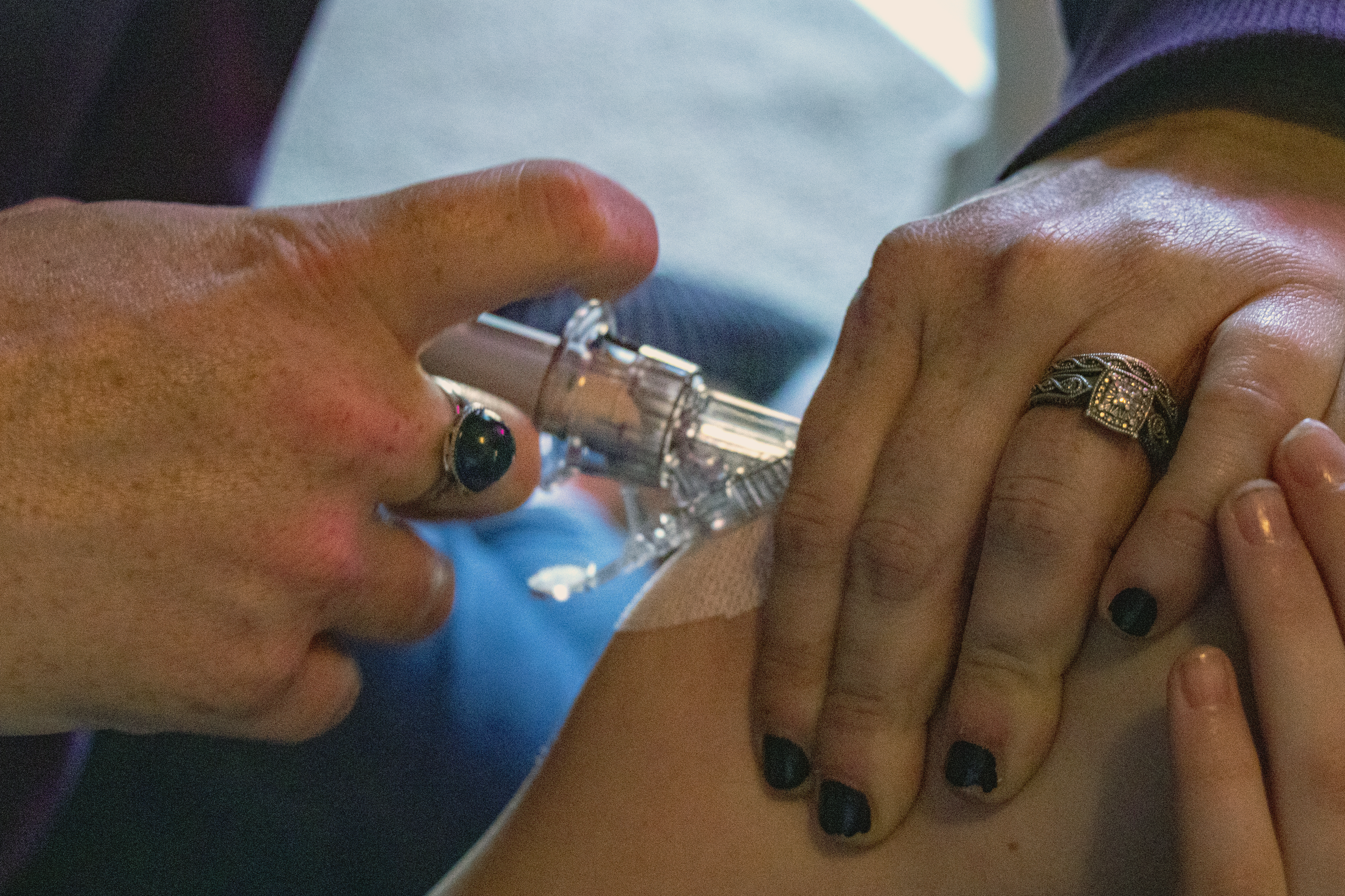 Lucy, a Scottsburg, Indiana, native, loves to draw. She loves to dance and tell jokes. She is a very social child, spending as much time as she can with her friends and grandparents. She loves eating ice cream, and her favorite color is purple. She has lived with Type 1 diabetes for three years.

Type 1 diabetes is an autoimmune chronic condition in which the pancreas produces little to no insulin, a hormone needed to control sugar levels. Diabetes, both Type 1 and Type 2, affects 34.2 million people in the United States. Of those, only 1.6 million people live with Type 1 diabetes. It's not preventable and has no cure.

Insulin pricing has spiked in recent years, prompting a national conversation as patients struggle to cover ever-increasing costs. Both Colorado and Illinois have capped the price of the insulin. A proposed bill to cap the price of a month's supply of insulin at $100 was voted on March 3 in the Indiana State Senate but failed in a vote of 13-36.

The amount of insulin a patient needs varies, with patients typically requiring more as they grow older and gain weight. Lucy goes through three vials of Humalog, nearly $1,000 worth of insulin, a month.

A study under the Yale Diabetes Center found that 1 in 4 patients at the urban clinic at Yale reported underusing insulin because of the price.

Being diabetic means Lucy has had to grow up just a little bit faster. The days of thoughtlessly eating cookies are over. Everything has a carb count. She has to be given insulin every time she eats.

When she runs around and plays with her friends, adults around her have to be ready to swoop in at a moment's notice if she needs medical help. Her blood sugar could quickly fall, and she could pass out. Or, her sugar could start to skyrocket and she could start puking. Her family now has to juggle how to best take care of her and how to let her be a kid.

Cheerful laughter filled the living room in the Matthews' home one afternoon in February as Lucy and her cousins ran around playing. Later, Lucy sat in the kitchen with her cousins and mom about to play the offline texting card game, New Phone, Who Dis? when one of her cousins grabbed a cookie. Wanting one herself, Lucy jumped up on the counter. 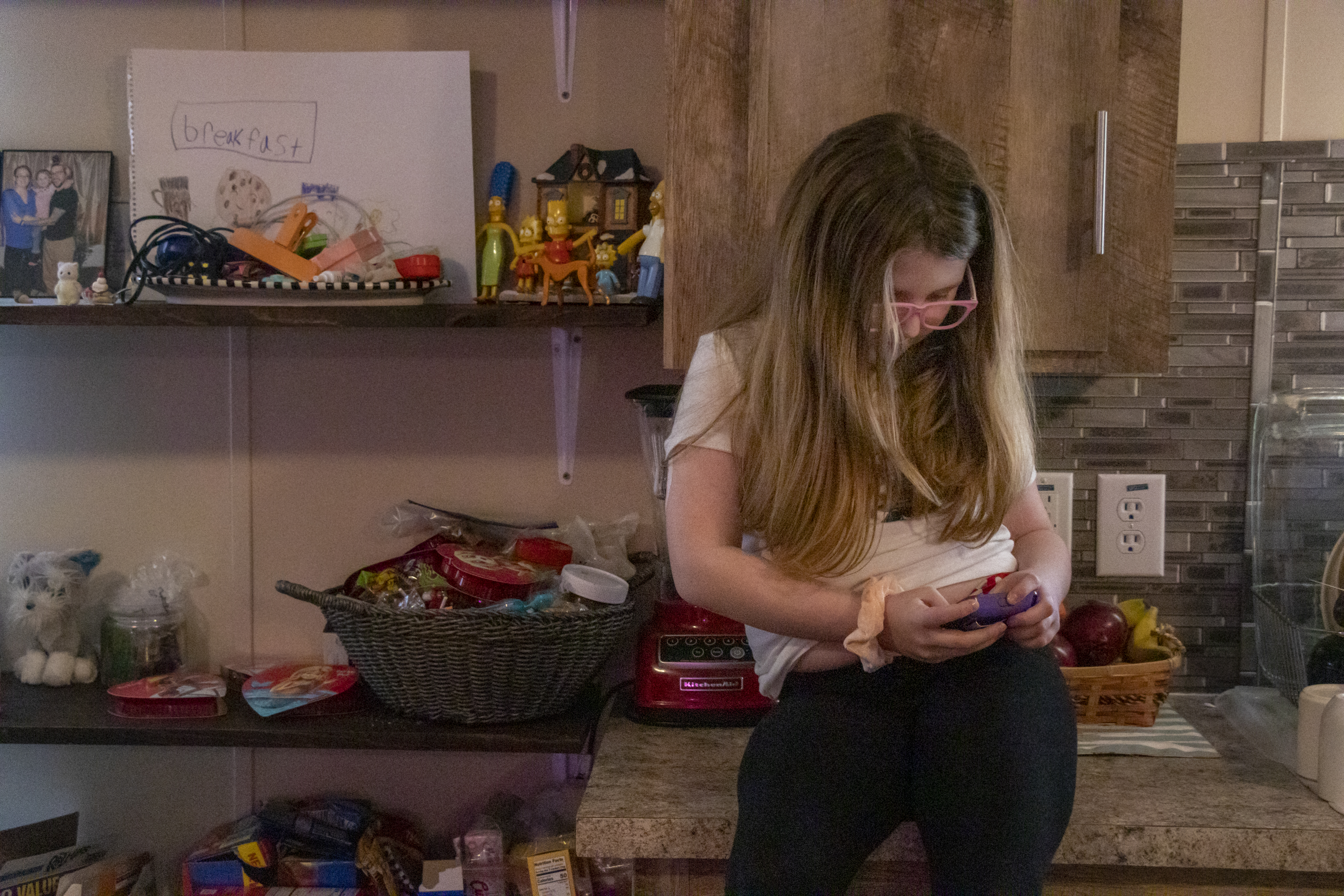 Lucy, 8, gives herself insulin before eating a snack. Lucy and her mother must always check her blood sugar and administer the right amount of insulin to keep her numbers in check.

She asked Ashley: "Mom, how many units for this?"

Ashley checked her daughter's sugar on an app from her Dexcom sensor, a constant glucose monitor Lucy wears, to determine how much insulin her daughter needed to take for the treat.

Lucy can work her insulin device herself, but leaves the needles to her mom.

She pulled the small machine, which resembles a pager from the red polka dot fanny pack she wears. The sensor lets Lucy check her insulin and administer more of. She pressed some buttons before watching 10 units of insulin flow from the device through a tube and into her stomach.

By the time she was done giving herself insulin, her cousins had already finished eating their snacks and were ready to keep playing. Before running over to join them, Lucy shoved a sugar cookie in her mouth. 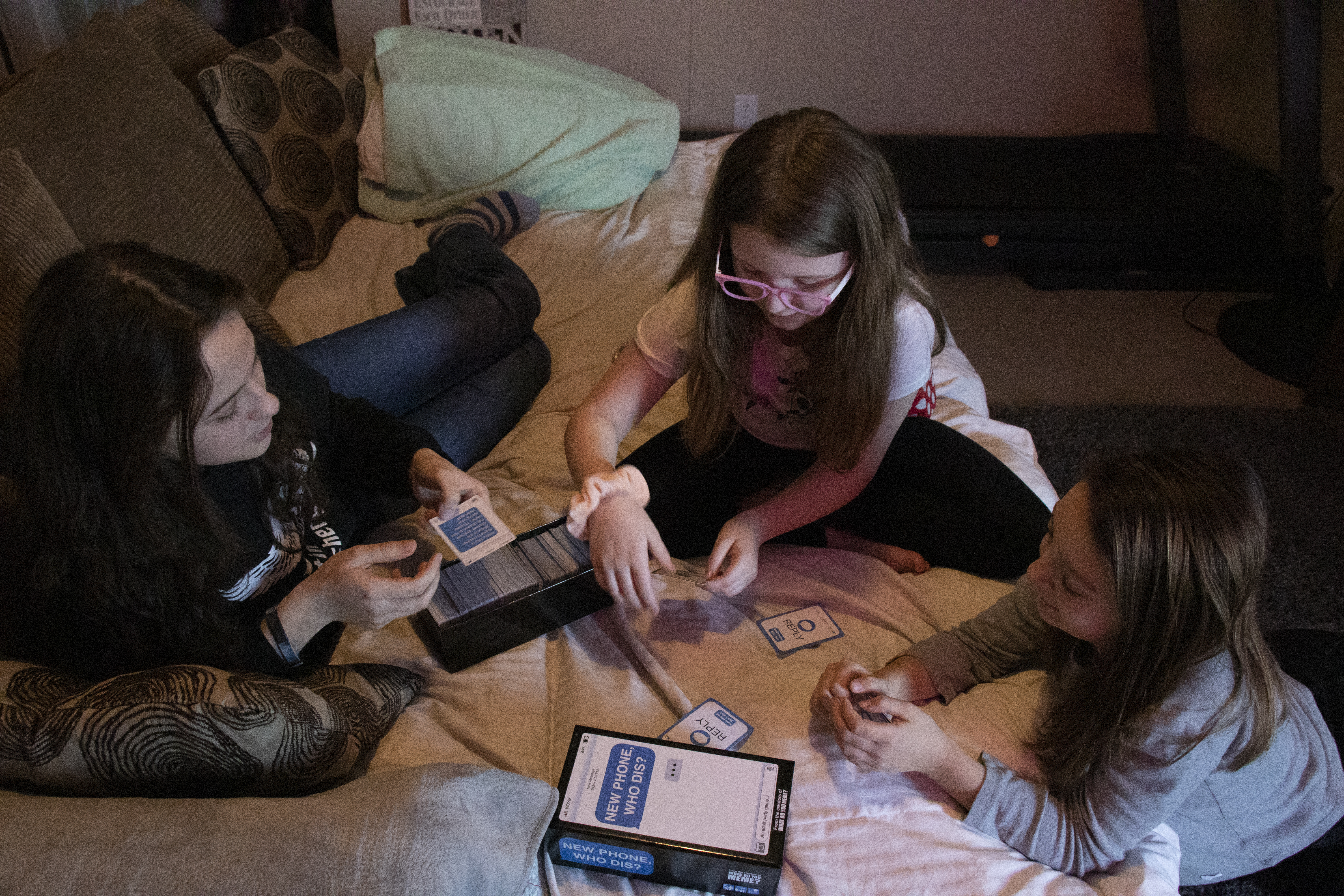 Cousins Kaitlyn, Lucy and Carmen play New Phone Who Dis? with one another in Lucy’s living room. Lucy said she sees the stigma society has set for diabetes, but she does not let that stop her from being a kid.

The average 4-year-old weighs 40 pounds. However, when Lucy was 4, she only weighed 30 pounds and was rapidly shedding more weight. Ashley and Garrett were worried.

One doctor thought Lucy had facial cellulitis, an infection of the facial tissues. The penicillin she was prescribed backfired when she broke out into a head-to-toe rash. Another doctor said her symptoms were from just a normal stomachache and combined with the penicillin and steroids prescribed for the rash, but the symptoms did not go away.

“You see it happening, but you can't do anything to stop it.”

There was a point when Ashley thought Lucy was just dealing with anxiety. She was constantly shaking and crying all the time, but then she kept getting sicker.

On Jan. 22, 2017, Lucy was unable to walk. The family was getting worried. After suggestions from family members, Ashley used her diabetic stepfather's glucose meter to check Lucy's sugar levels.

Lucy screamed and cried at the finger poke, the first of many. The meter read, in all caps: HIGH.

"We were all like 'what?' So we checked again and of course Lucy is screaming and crying because she does not want to get poked, but it read HIGH again," said Ashley.

Ashley called her best friend Kenzi McRadey, a registered nurse who recommended the family head to Norton's Children Hospital in Louisville, Kentucky, an hour drive away from home.

Lucy's condition was so unstable that she was put into the pediatric intensive care unit upon arrival at Norton's. Once her family told medical staff her sugar was reading HIGH, it wasn't hard to diagnose her.

The doctor walked into the room with a big smile on his face.

Lucy was actually in diabetic ketoacidosis, a condition in which blood begins to turn acidic, when she arrived at the hospital. Lucy's blood sugar was more than 600, nearly eight times higher than the average blood sugar of 80. The doctor informed Lucy's parents that if she would not have come in that night, their daughter would have died. 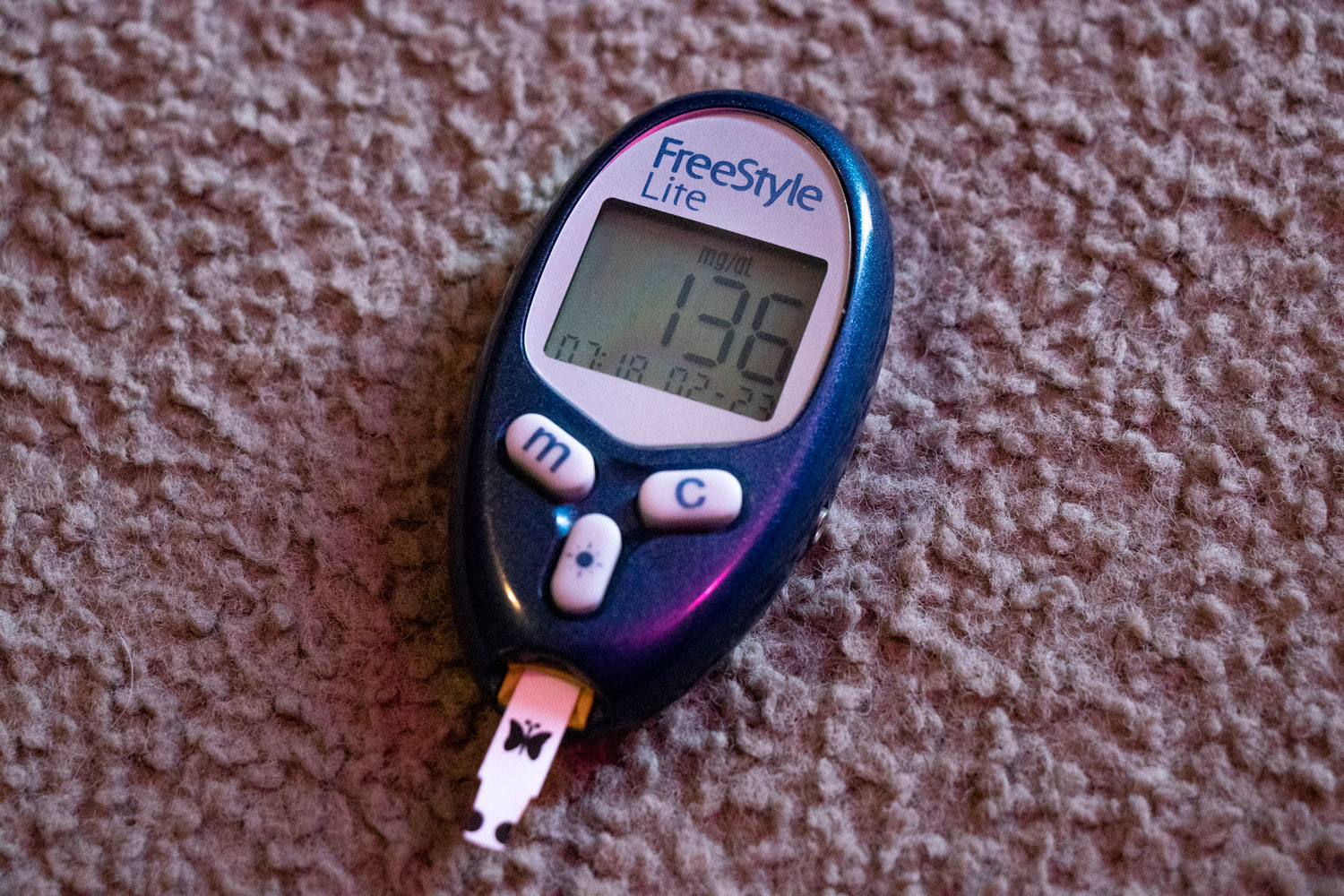 A glucose monitor reading “136” sits on the floor after Lucy checks her blood sugar. When Lucy was diagnosed, her blood sugar just read HIGH on the monitor.﻿

Doctors and nurses swarmed a severely dehydrated Lucy in the hospital. While preparing to give her a central line, a nurse was able to find a vein in her foot after 30 minutes of searching.

Lucy was initially brought to the Pediatric Intensive Care Unit. It took roughly three days to move her to the diabetes floor.

Ashley said it was like having a perpetual newborn. Lucy constantly had to be cared for.

While in the hospital, doctors and nurses spent two hours instructing Ashley and Garrett about Lucy's new needs. Parenting a diabetic child meant Ashley and Garrett needed to learn a new set of skills: how to check blood sugar, how to give her medication, the differences between varieties of insulin.

Now, they have to be ready to step in when Lucy's blood sugar levels suddenly drop. One time when she was 6-years-old and "low," Lucy climbed into the refrigerator and sprayed whipped cream in her mouth for a quick sugar fix.

"This is the side that a lot of people do not see," Garrett said.

Facebook groups and Google provided Ashley and Garrett with 95% of their diabetes information. It took them years to be able to fine-tune and figure out the small, ever-shifting details of caring for their daughter. As Lucy grows, the numbers change and so does the way her body reacts to different stimuli. 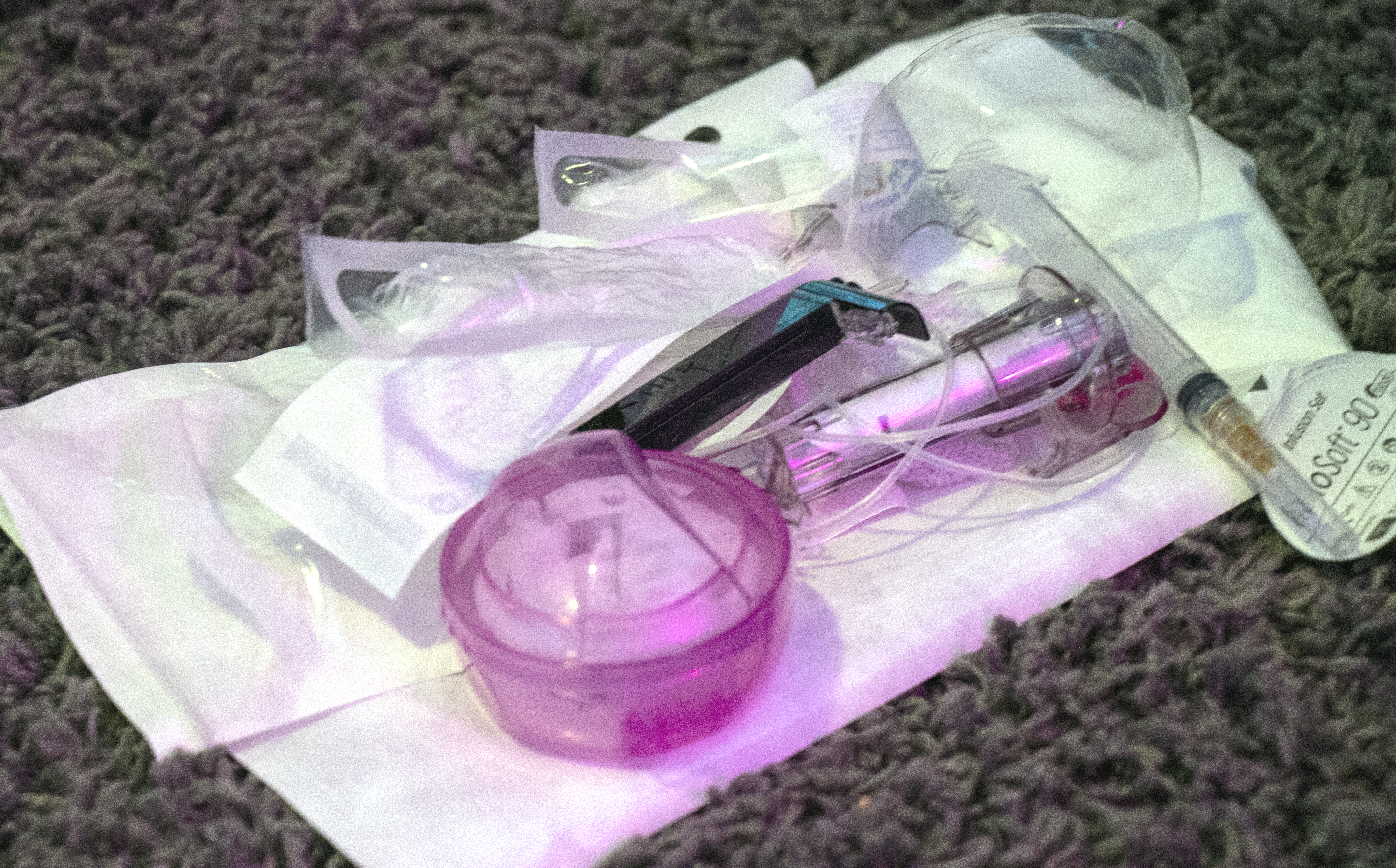 A pile of trash lays on the floor after Ashley Matthews does both a pump and Dexcom site change on Lucy. She uses a Tslim pump and the Dexcom g5. 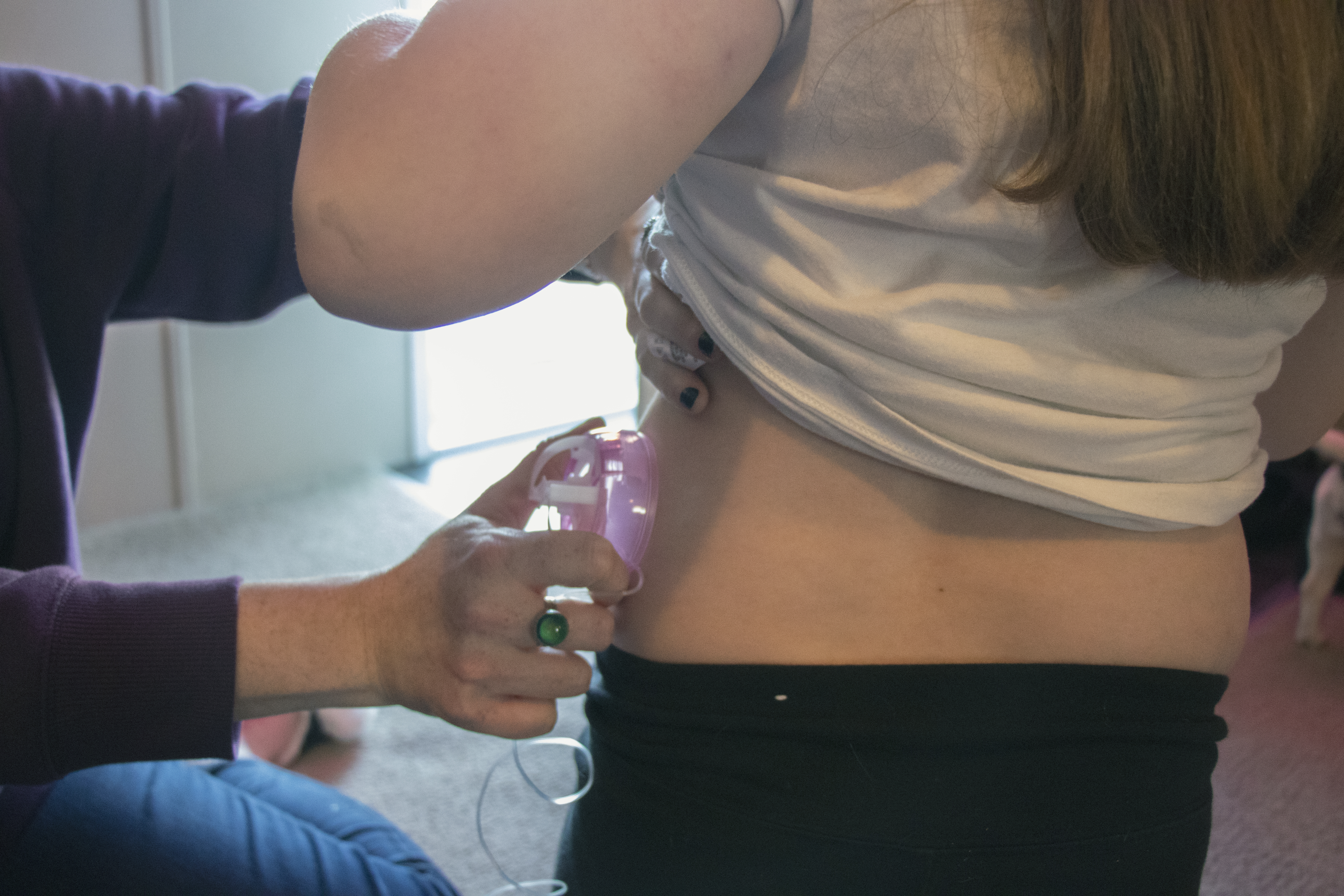 When they left the hospital with all the prescriptions and called CVS, they were told nothing was covered and it was going to be a $1,200 bill just to get the things to keep her alive.

"I'm crying in the hospital, and we will forever be in debt when paying off her hospital bill," Ashley said.

Garrett's parents offered to pay for Lucy's medical costs after the first bill, but that only went so far. That high bill would be the first of many for the Matthews. 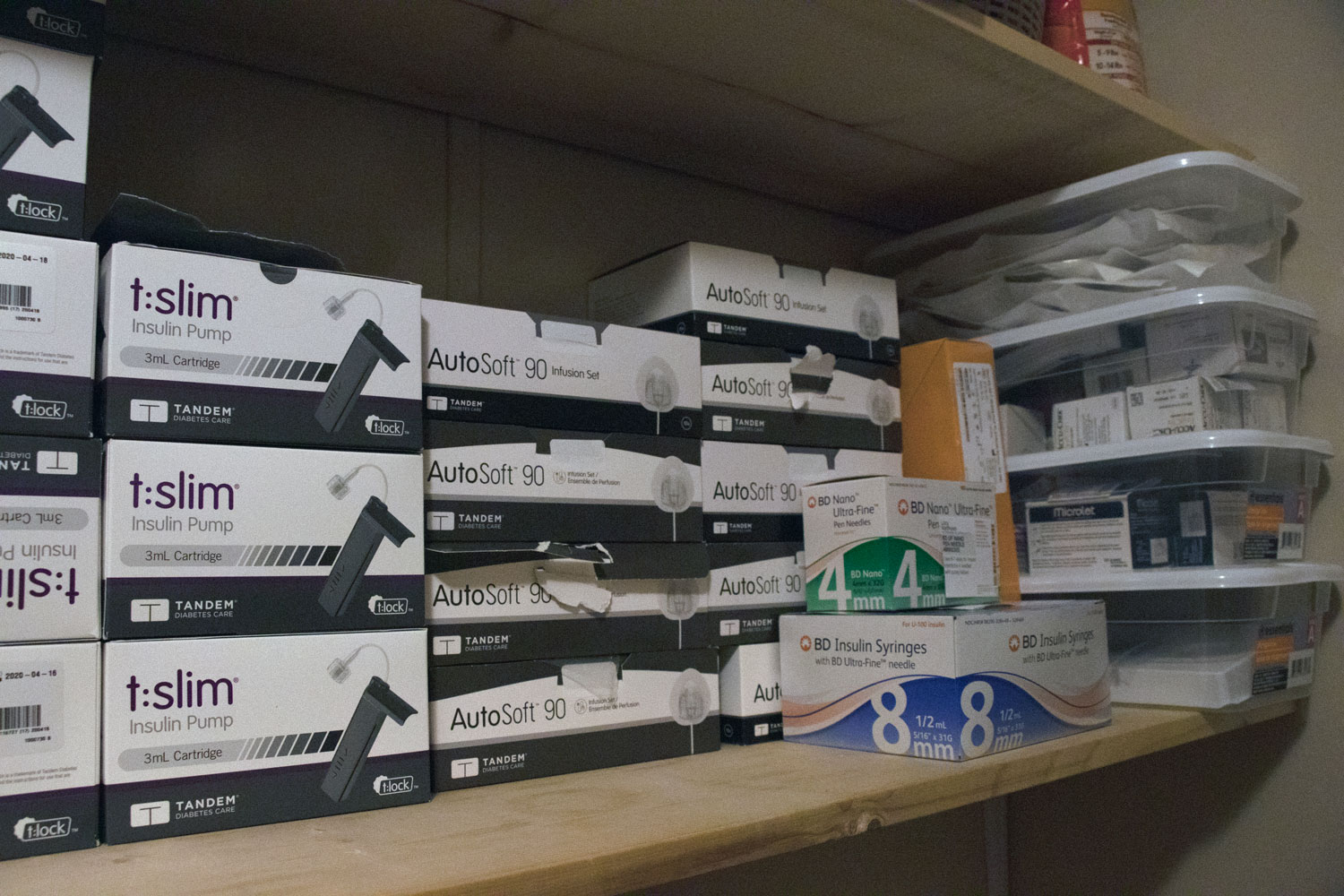 Boxes of diabetic supplies sit on a shelf in the Mathews’ home. Ashley, Lucy’s mom, stocks up on supplies just in case they cannot get supplies﻿for a month.﻿

Even though they have health insurance, sometimes it's cheaper for them to buy supplies at cash price due to inflated insurance costs. All together, Lucy's parents estimate they pay around $15,000 per year out of pocket, a major financial burden for Garrett, a cook, and Ashley, a stay-at-home mom.

One vial of insulin contains 10 milliliters, and each milliliter has 100 units. That cookie with her cousins cost the family $3.32.

Ashley said the root of the problem is that pharmaceutical companies' motivation lies in profit instead of care.

Having diabetes became more than just being sick - it became a flood of emotions for Lucy.

Even though she's young, Lucy can see the stigma. She sees the glances from grocery store cashiers as they see diabetic supplies and sugary foods on the belt. She knows that people stare at her pump.

"It is time for a revolution," Ashley said. "We are not going to do it anymore." 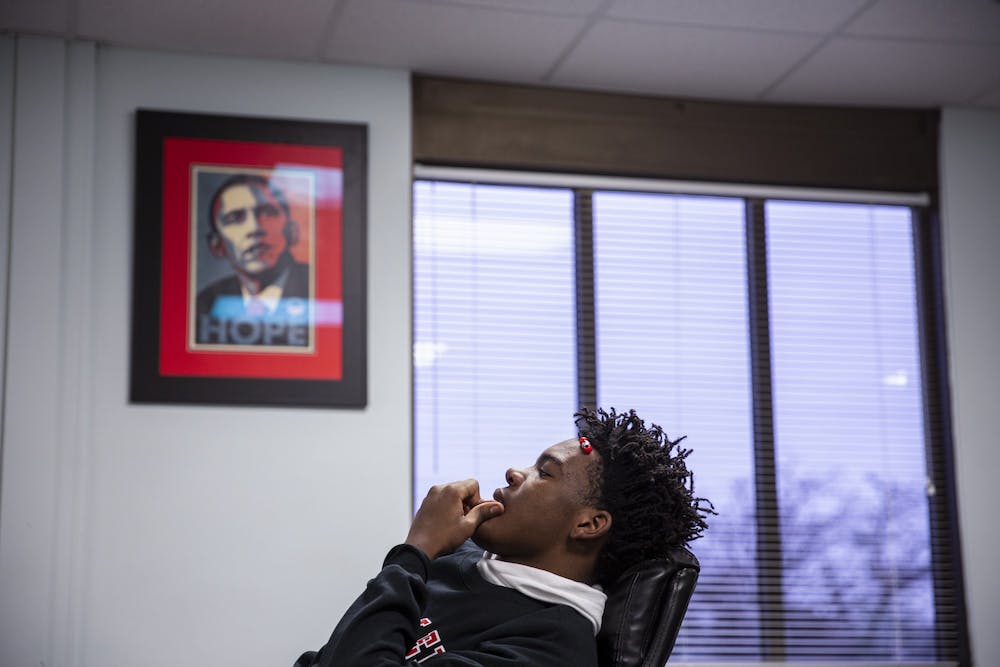 Da’Quincy Pittman missed two months of his sophomore year when he was shot six times. Last week, he went back to class at his school, where four other students have been shot in the last year. 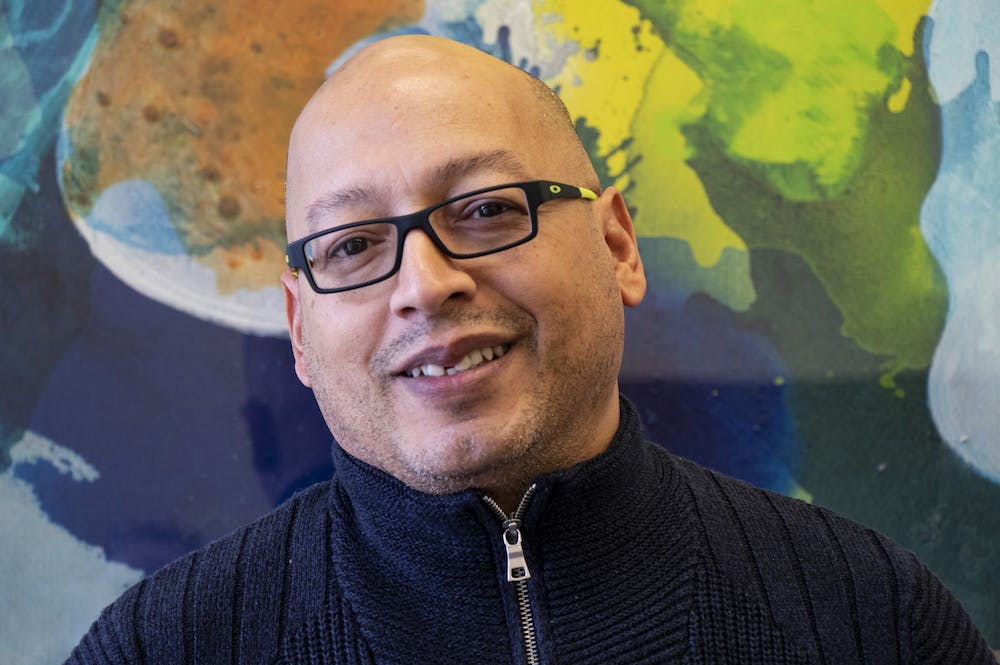 In 1997 he fought for the LGBTQ+ Culture Center. Now he’s its interim director.

Bruce Smail fought for LGBTQ and minority rights at IU as a graduate student in the ‘90s. This semester, he returns to campus as the interim director of the LGBTQ+ Culture Center. 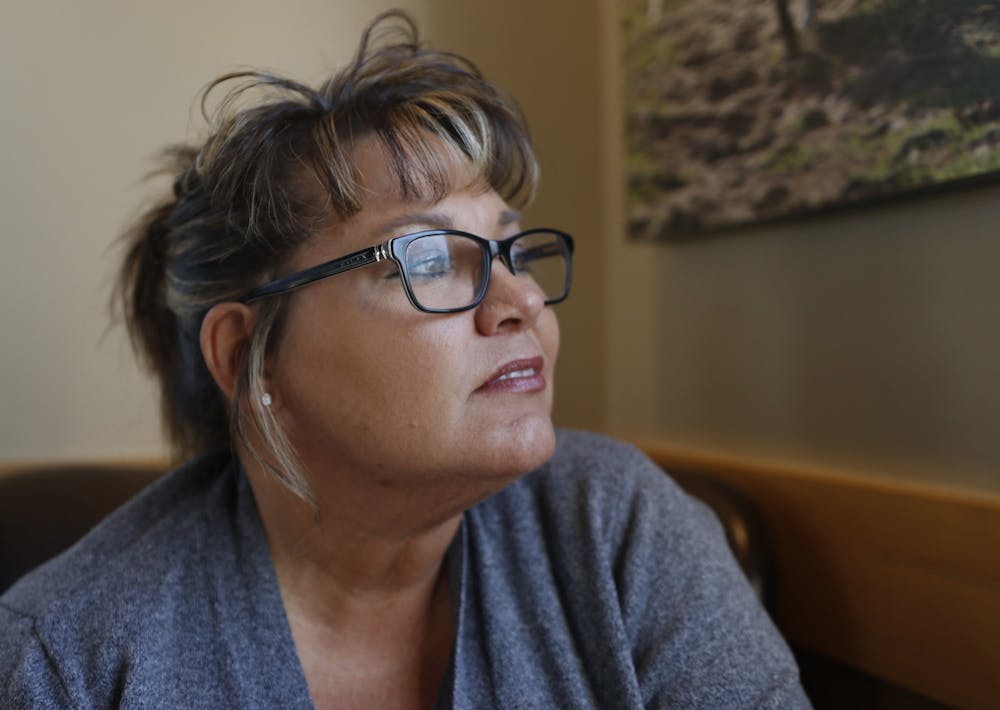 The woman behind the boxes