After more than three years of battling with IU administration for higher pay and lower fees, some graduate student workers are refusing to teach classes, grade assignments and perform other tasks until IGWC-UE votes to end the strike.

The strike comes as a last resort after the university rejected IGWC-UE’s request for an election to certify their status as a union in February.>

By 10 a.m. Thursday morning, shouts, cheers, boos and songs echoed from all corners of campus. 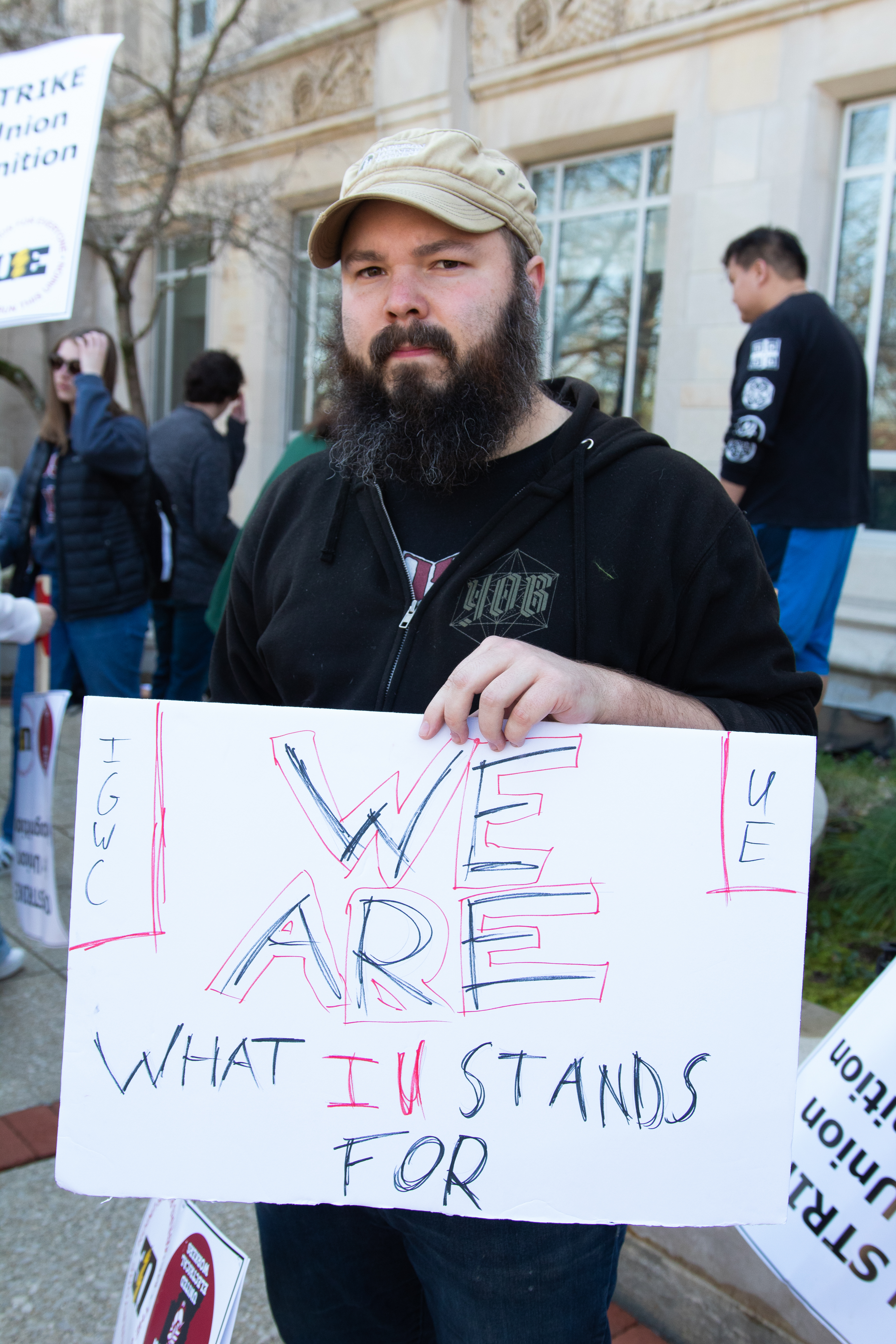 English Ph.D. candidate Nathan Schmidt holds his homemade sign during the graduate workers' strike in front of the Chemistry Building. "I see all the smartest people I know living in poverty," Schmidt said. “That's unacceptable. I've been a part of this for four years and I've seen us struggle to be seen as workers. I'm almost done, so whatever happens in the next couple weeks, I won't be around to see the fruits, but my colleagues will finally get what they deserve." 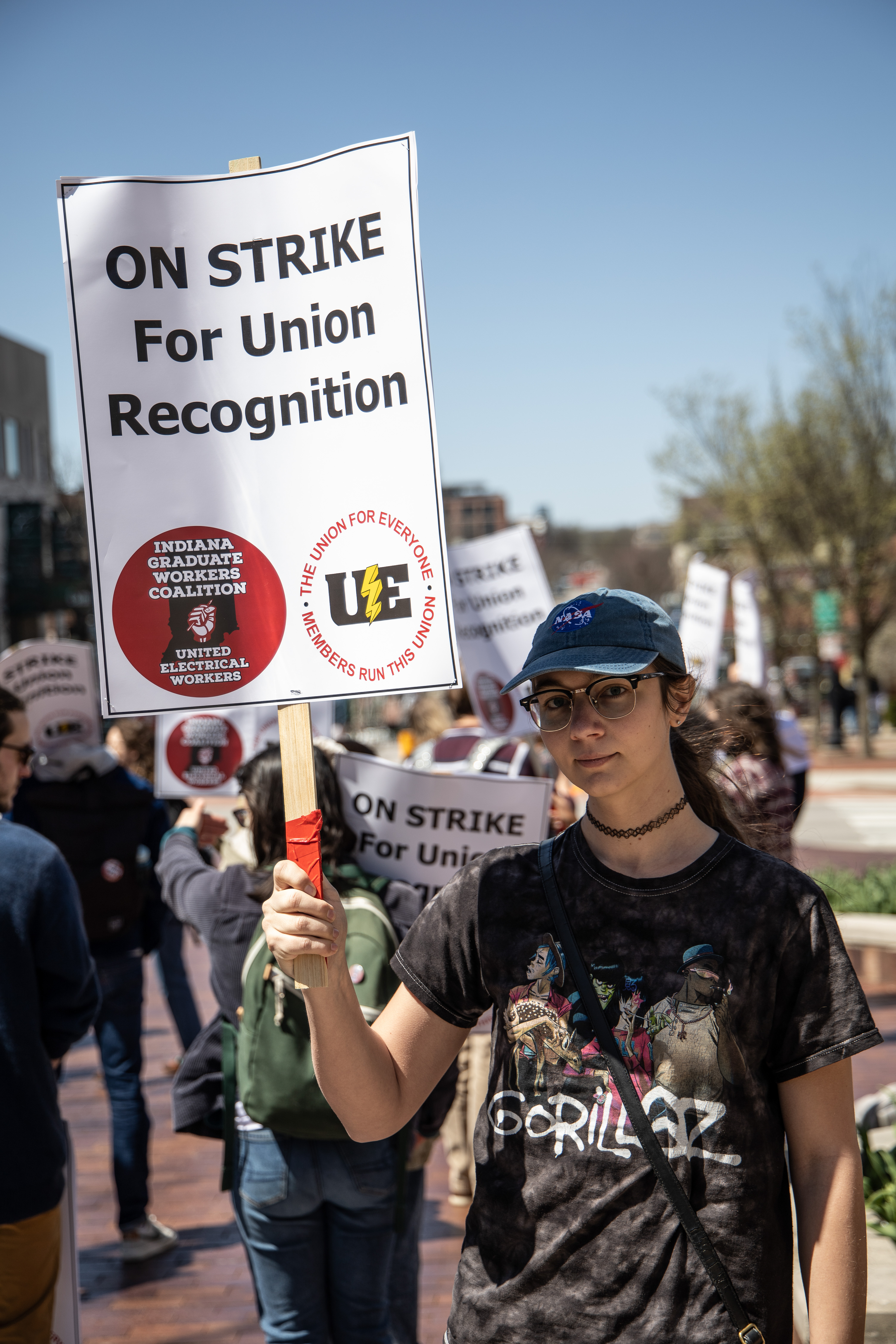 Sophomore Abby Kickbush holds an Indiana Graduate Workers Coalition-United Electrical Workers sign while posing for a portrait April 14, 2022, at Sample Gates. “I’ve seen how these graduate workers are exploited,” Kickbush said. “Some of my class have been almost entirely run by graduate workers and the fact that they’re not getting paid a living wage is bullshit, honestly." 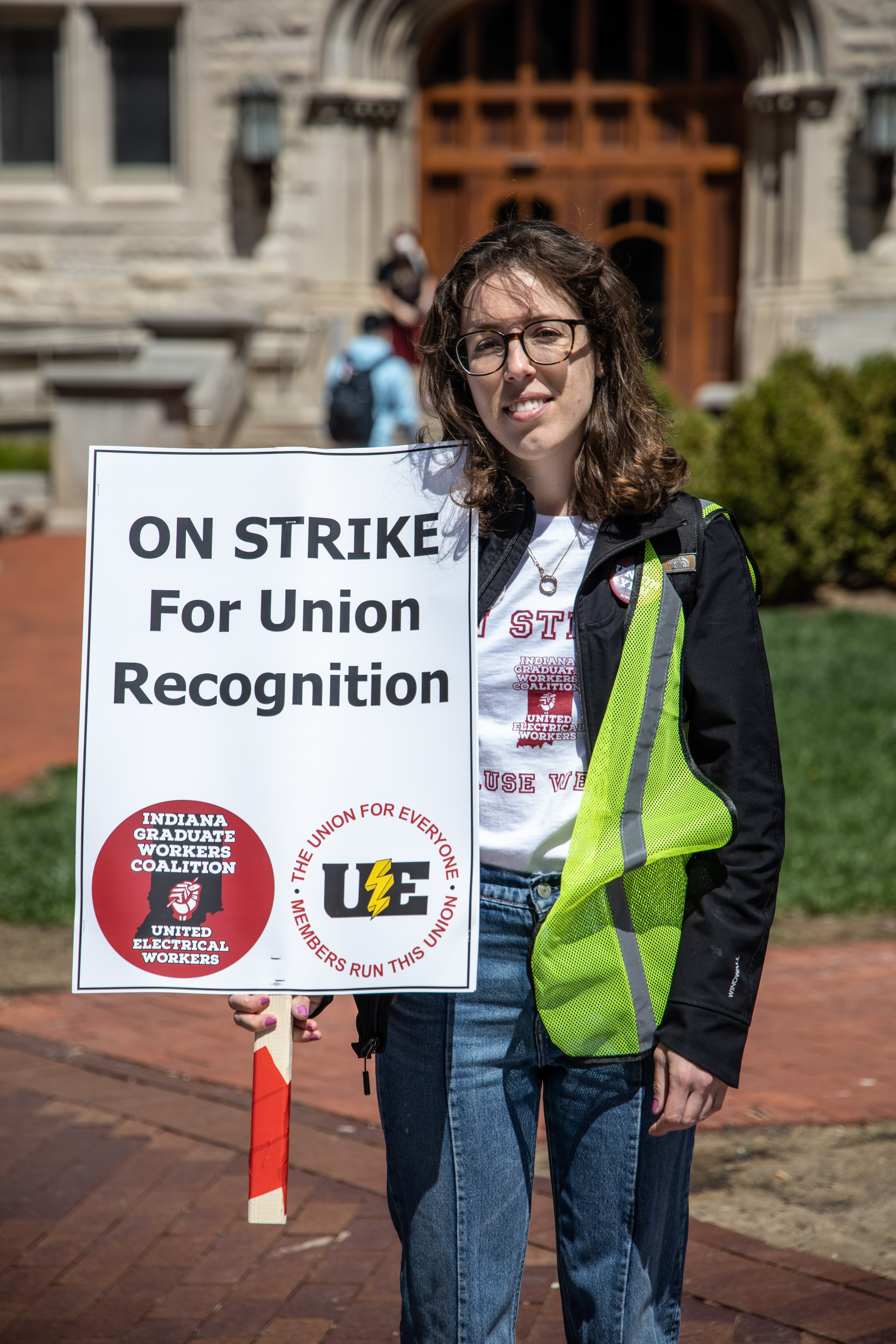 Fourth year Ph.D. student Nora Weber poses for a portrait April 14, 2022, in front of Franklin Hall. “I’m here because I see all the work that my peers do,” Weber said. “I see all the work that I do. I believe firmly that if this is an institution of higher education, we should be paying the educators here. IU has raised tuition. IU has raised billions of dollars in its endowment and it continues to raise enrollment. We just want to see that money going into the people who are here so they have a dignified wage and a dignified quality of life.” 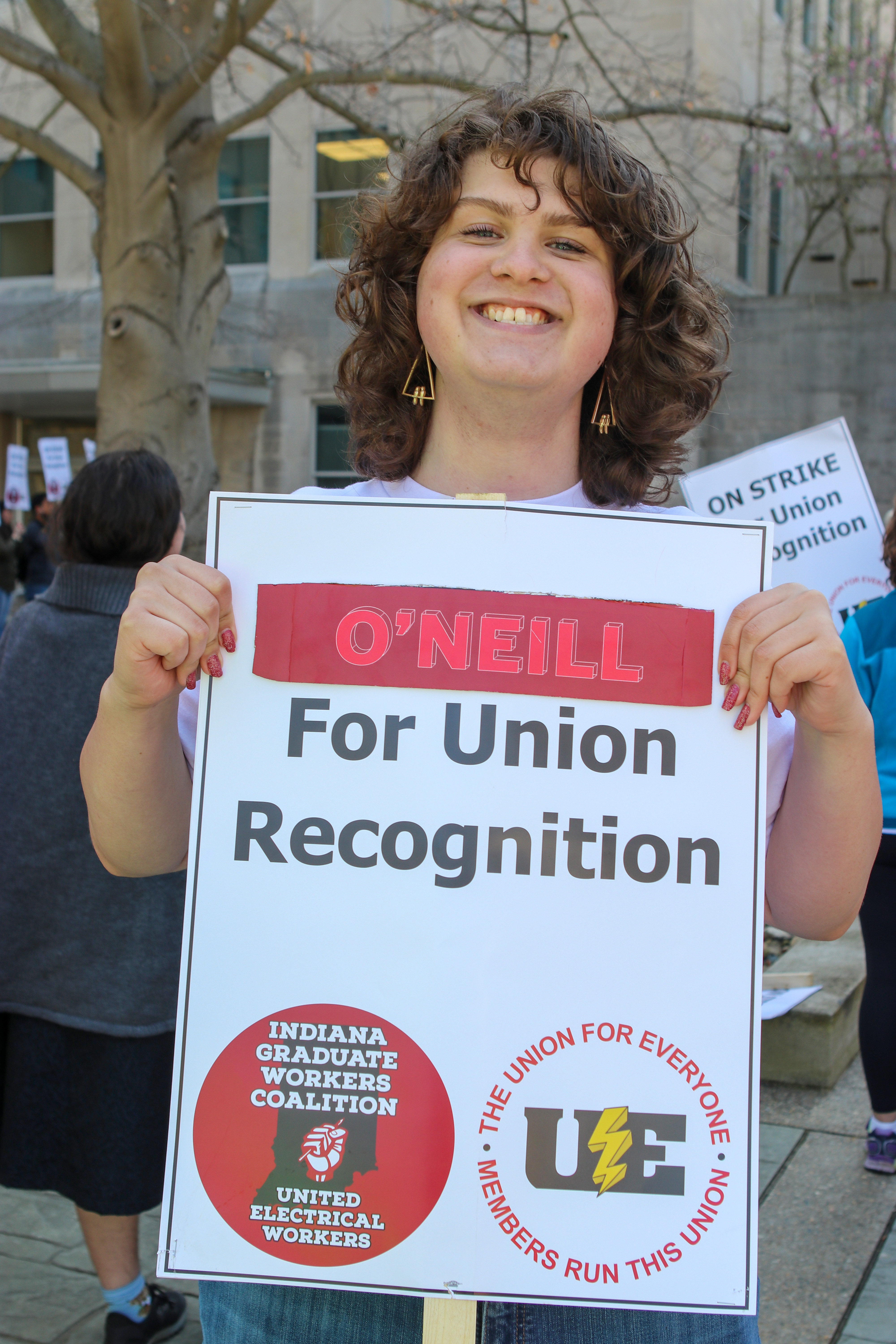 Undergraduate student Jackson Bell poses for a portrait while holding a sign reading "O'Neill For Union Recognition" on April 14, 2022, outside Ballentine Hall. "IU teaches me about how much unions are important for workers to better their situation, and so I want to teach IU's lesson back to it," Bell said. 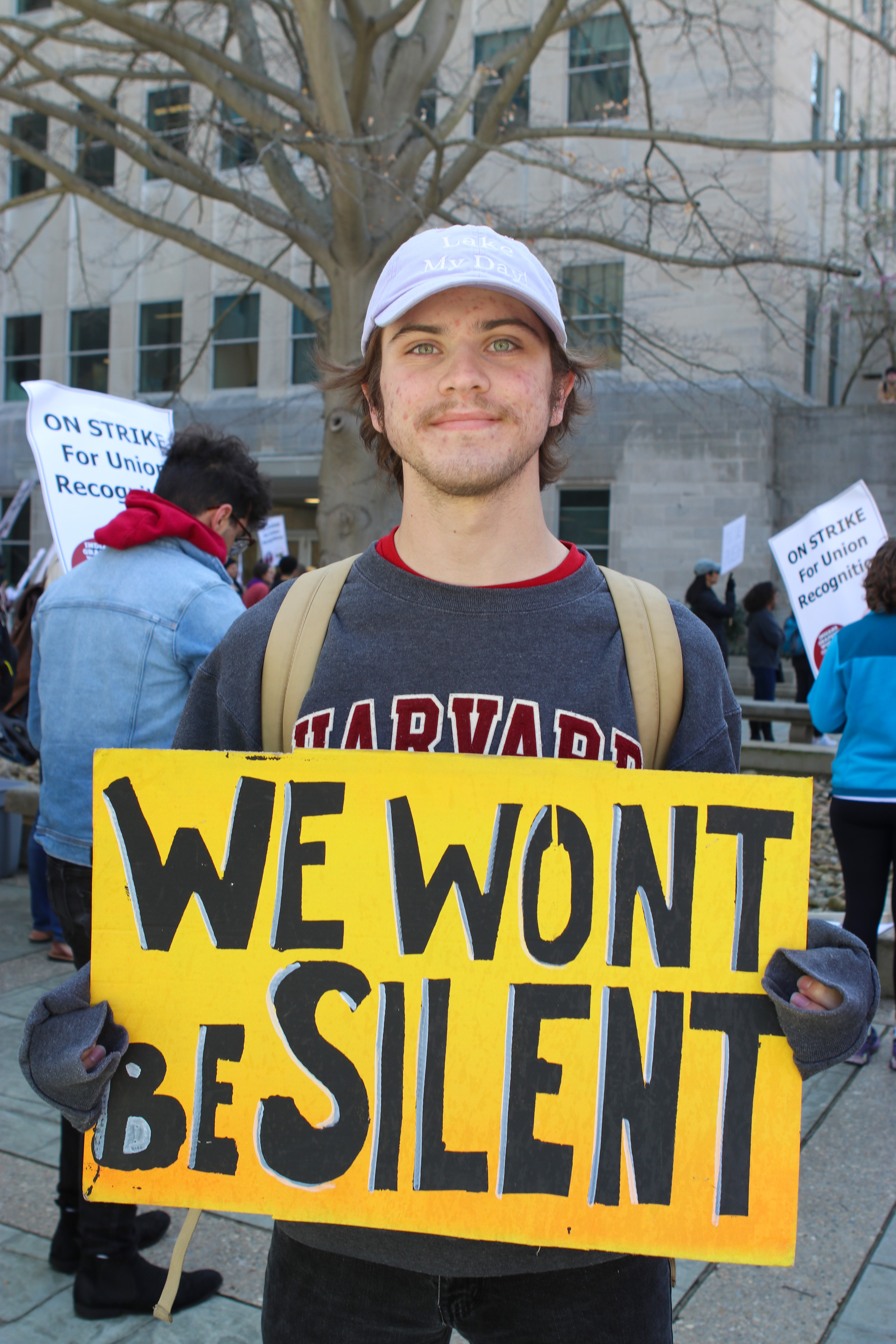 Undergraduate student Jonah Adams stands for a portrait April 14, 2022, outside of Ballantine Hall. "I'm out here to support, show support and hopefully create change in the university," Adams said. 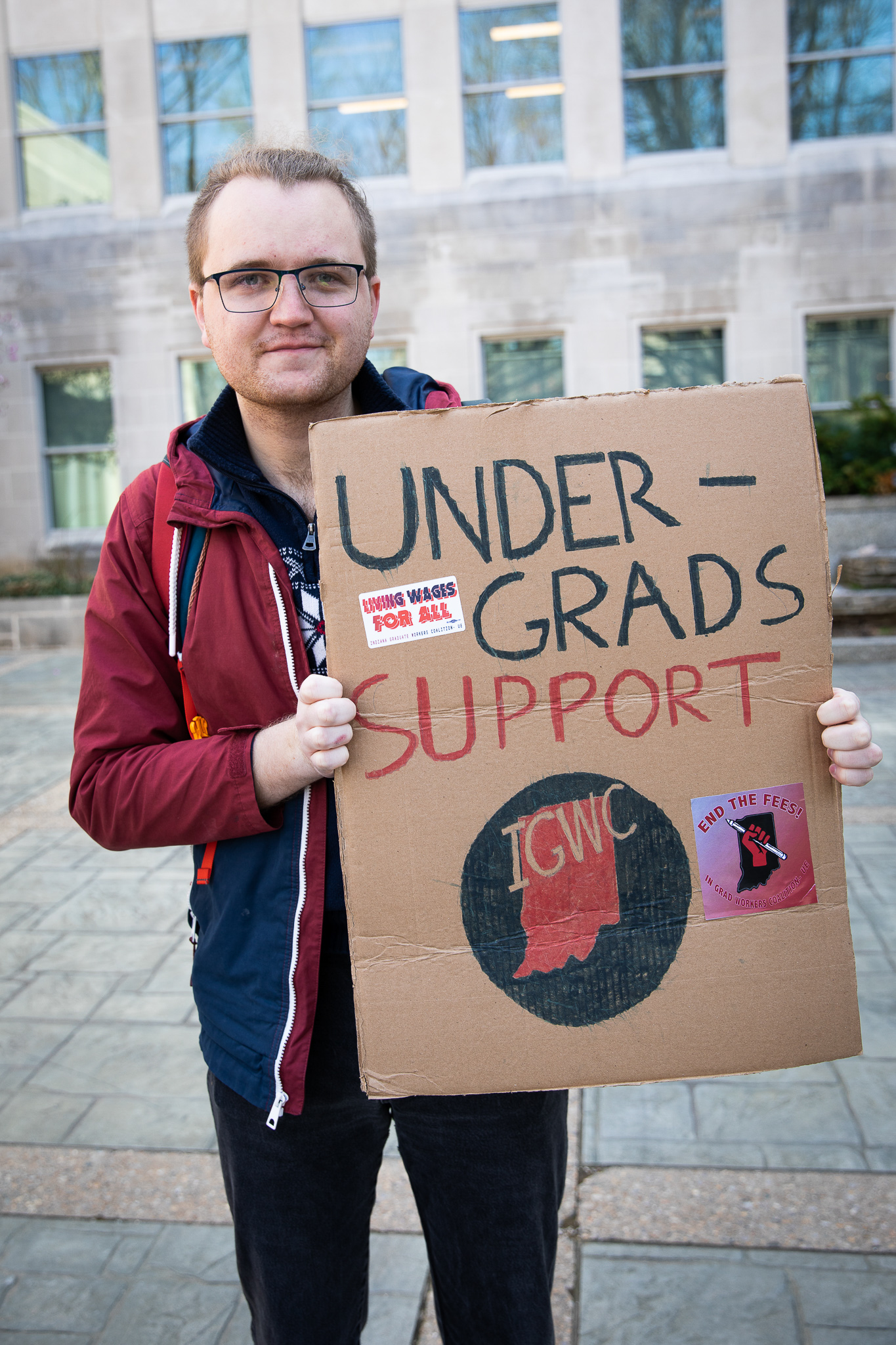 Undergraduate Timothy Clark stands with a homemade protest sign to show his support of the graduate student union on April 14, 2022, at Ballentine Hall. The graduate workers protests began on Thursday after being postponed due to weather.