Langdan Willoughby, 19, remembers standing in the dark basement of IU's Kappa Kappa Gamma house on a February night last year. She was among about 50 other pledges allegedly told to shut up and face the walls in silence.

Senior sorority sisters clad in lingerie ran around the pledges, she said, screaming and laughing. They allegedly wielded wooden paddles, hitting the walls in front of pledges to startle them. One sister came over to Willoughby and smacked her butt with a paddle, she said.

Willoughby felt numb and confused. One thought came in waves — Is this really happening?

Langdan Willoughby, 19, is photographed in Indianapolis in March. Willoughby alleges she was hazed during her time as a member of Kappa Kappa Gamma, and she later disaffiliated from the sorority.

"Get on your knees!" she recalled hearing a sister shout. "The boys are coming!"

Willoughby began scanning the room, searching for an escape in the dark. She wanted to call for help, but she said the sisters had taken the pledges' phones before leading them to the basement. Before she could find an exit, the lights flipped on.

"Just kidding!" the sisters said, laughing. They told the group they were lucky they didn't have to do anything worse as pledges for a top-tier sorority, Willoughby said.

“Get on your knees.

The boys are coming!

Two women who were also present that night corroborated key details in Willoughby's account. Two other women affiliated with IU's chapter of the sorority described similar events happening during three separate years. All five said these events happen on Kappa Kappa Gamma's Big Little Night, an annual event when pledges find out which older member of the sorority is their "Big sister" and mentor.

The pledge class did not actually have to do drugs or perform any sexual acts that night. But Dr. Susan Lipkins, a psychologist and expert witness in hazing cases, said the alleged events are hazing because they are humiliating, degrading and used to maintain hierarchy in the sorority.

The Office of Sorority and Fraternity Life and the Division of Student Affairs did not respond to requests for comment.

"We can't confirm or not a specific allegation as it may be part of an ongoing investigation," IU spokesperson Chuck Carney said in an email Wednesday evening. He said he could not say whether Kappa Kappa Gamma is under investigation at this time.

"Student health and safety is of paramount importance to Indiana University. The university does not tolerate acts of hazing and takes hazing allegations very seriously," he wrote.

“Kappa has a strong value system and high ideals. You will see this reflected in our ritual services. We expect our members to promote integrity, respect and appreciation for individuality. ... You are also concerned for the welfare of all people...”

“... In a close-knit community like Kappa, your role in modeling healthy behaviors can have far-reaching effects. ... Valuing health helps you make wise decisions about how you use your body and mind. It also helps you avoid situations that could compromise your well-being.”

The two other women who were present on Big Little Night 2020 and confirmed Willoughby's account asked to remain anonymous out of fear of retaliation from the sorority.

Both corroborated key details of Willoughby's story — the dark basement, the lingerie, pledges' phones being confiscated, older sisters with paddles intimidating pledges and the sisters telling them they would have to either perform oral sex on fraternity men or do a line of cocaine.

"My brother is in Pi Kappa Phi and he's bringing some friends over, they're waiting for you," one of the women recalled a sister telling pledges as they were lined up to go into the basement.

Another sister told pledges "blow or blow" was going to be their punishment for being "the worst pledge class ever," the woman said.

"I was fully physically, emotionally and spiritually disturbed by the entire thing," Willoughby said.

She said she left Kappa Kappa Gamma last summer because of these events, along with issues of inclusion and racism she said she experienced as one of the only Black women in the house.

"There's no real sisterhood," Willoughby said. "With all of the sexual harassment that goes on at IU's campus, I don't see why Kappa would subject another woman to that."

The Division of Student Affairs’ hazing page defines sexual harassment to include "any unwelcome conduct or behavior of a sexual nature that creates or contributes to a hostile environment."

From fall 2016 to fall 2020, an average of seven IU greek life organizations were disciplined each year for hazing. Since 2016, three sororities and 14 fraternities have been placed on disciplinary probation for hazing — some multiple years in a row. Five more have been suspended by IU or their national chapters for hazing.

While most people think of hazing as a fraternity practice, it happens in sororities, too.

IU policy defines hazing as “any activity which subjects another person, whether physically or mentally, emotionally or psychologically, to anything that may endanger, abuse, or degrade or intimidate the person as a condition of association within a group or an organization, regardless of the person’s consent or lack of consent.”

According to Kappa Kappa Gamma’s national policy, any member who participates in or permits hazing is subject to dismissal or disciplinary action.

Lipkins, who characterized the events in Willoughby's account as hazing, defines hazing as a process used by groups to maintain hierarchy or discipline. Hazing events have the potential to cause physical or psychological damage to those involved, she said.

"Being misinformed that you are going to have to perform a sexual act against your will is hazing, even if [the sexual act] doesn't occur," she said.

Some people may find this type of hazing harmless, Lipkins said, while others could experience long-term psychological effects, including sleep issues, anxiety, depression or post-traumatic stress disorder.

IU has various classifications for disciplinary action against student organizations, including probation, suspension and expulsion.

The level of trauma depends on the individual and their previous experiences, Lipkins said. She noted that sexual assault survivors, if present, could have been retraumatized. According to campus sexual violence statistics from the Rape, Abuse & Incest National Network, 26.4% of undergraduate female students experience rape or sexual assault.

IU's Kappa Kappa Gamma chapter was founded in 1872 and is the oldest continuous chapter in the country.

A woman who requested anonymity because she is still affiliated with Kappa Kappa Gamma said her experience on Big Little Night in 2017 shared similar elements with accounts of the 2020 event: The sisters also wore lingerie and had paddles, which they hit together to make noise.

“You guys have been bad.

It’s time to get hazed.”

"You guys have been bad," she remembered older sisters telling her pledge class as they stood in the dark basement, blindfolded. "It's time to get hazed."

Instead of "blow or blow," her pledge class was told to strip naked and run into the woods, she said. She said she didn't feel uncomfortable or intimidated, but another woman in her pledge class cried when they were ordered to strip. The sisters quickly told her it was a joke and they would not have to do it, she said.

"It's a prank to make you think you're about to get hazed, but you find out that no hazing actually occurs," the alumna said. "It's a prank on the fact that other sororities haze."

She said the pledge class from the year before is in charge of planning its own version of the event for the next group. This structure follows Lipkins' blueprint of hazing, in which hazing victims go on to become bystanders and then perpetrators.

"I don't think it's funny," the alumna said of Kappa Kappa Gamma's alleged treatment of pledges. "If you really fall into it and believe it, you're worried that it will actually happen."

Women from the 2017, 2019 and 2020 pledge classes spoke to the Indiana Daily Student about variations on the tradition. The woman from the 2019 pledge class said Kappa Kappa Gamma members call it "The Screaming."

She said her 2019 class was also taken to the basement on Big Little Night. It was pitch black and they were forced to face the walls in silence with their heads lowered for about 15 minutes, she said. Drunk sisters in lingerie and high heels then made their entrance, she said, accompanied by the woman chosen to be "the screamer." There were no paddles or threats of "blow or blow" involved, she said, but pledges were verbally berated for about 15 minutes.

"You're sluts and you're going to ruin Kappa's reputation!" the screamer yelled at them, the woman said. "No frats are going to like us!"

The woman described the event as "terrifying" and said multiple women in the pledge class cried.

Lipkins said she deals with hazing cases every year in which someone dies or is otherwise physically or psychologically harmed. The cycle continues because of the strong code of silence within organizations that practice hazing, she said. 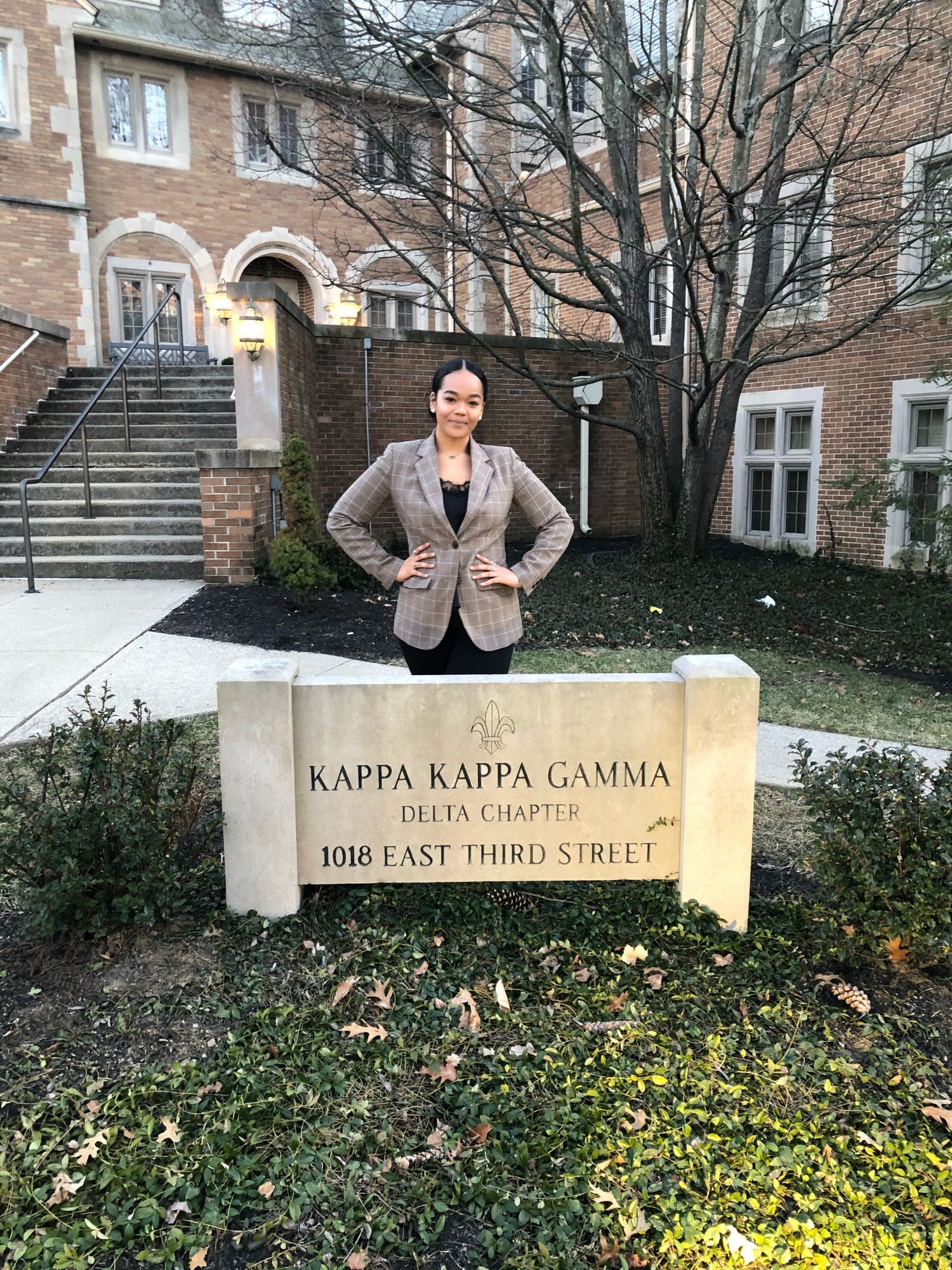 "If you're lucky enough to walk away and think it's funny, good for you," she said. "That doesn't mean what you did to someone else or what was done to you was not hazing."

Willoughby said she broke her silence to help other young women who are considering rushing and may be unaware of the hazing that can happen in sororities. All of the women who spoke to the IDS said their pledge classes were intimidated by Kappa Kappa Gamma to maintain silence about these events.

“I’ve grown past the fear that they tried to instill.”

"I've grown past the fear that they tried to instill," Willoughby said of Kappa Kappa Gamma. "I think information should be free."

If you or someone you know has been hazed, reach out. Contact the IDS at investigations@idsnews.com.

You can report hazing incidents to IU here. A list of resources is available here if you or someone you know has experienced sexual harassment or abuse.

TOP PHOTO Kappa Kappa Gamma is located on East Third Street. The sorority has been on IU's campus since 1872.

An organization may be placed on disciplinary probation for a specified period of time under conditions stated in writing. Probation includes a warning that any violation of the conditions, or any further acts of misconduct, will result in additional sanctions, which may include suspension or expulsion from the university.

If an organization is suspended, it will cease and desist all activities and disband. The length of a suspension will be proposed by the Administrative Conference Panel and will be decided by the dean of students.