For whom the bell tolls

The new Arthur R. Metz Bicentennial Grand Carillon, housed in a tower stretching more than 127 feet into the sky in the IU Arboretum, will ring for the first time at 11:45 a.m. on Monday as part of the university’s bicentennial celebration.

The carillon, which is an instrument inside the towering steel structure covered in limestone to resemble the other buildings on IU’s campus, was constructed with a budget of $7 million coming from private donors.

“I actually think it’s a spectacular structure,” said Jim Stewart, assistant vice president of Capital Planning and Facilities. “I think it’s going to be rivalling our most photographed locations on campus within a few years.”

Before the carillon makes its official debut, here's some information to keep in mind when you hear the bells ring.

What is a carillon, exactly?

According to the Guild of Carilloneurs in North America, a carillon is a musical instrument of at least 23 bells played using a connected keyboard. They’re usually situated in towers, like IU's. There are around 180 carillons in North America, with most located on university and college campuses.

What happened to the old carillon?

The original Metz Carillon was built in 1970 to celebrate IU’s 150th anniversary, called a sesquicentennial. 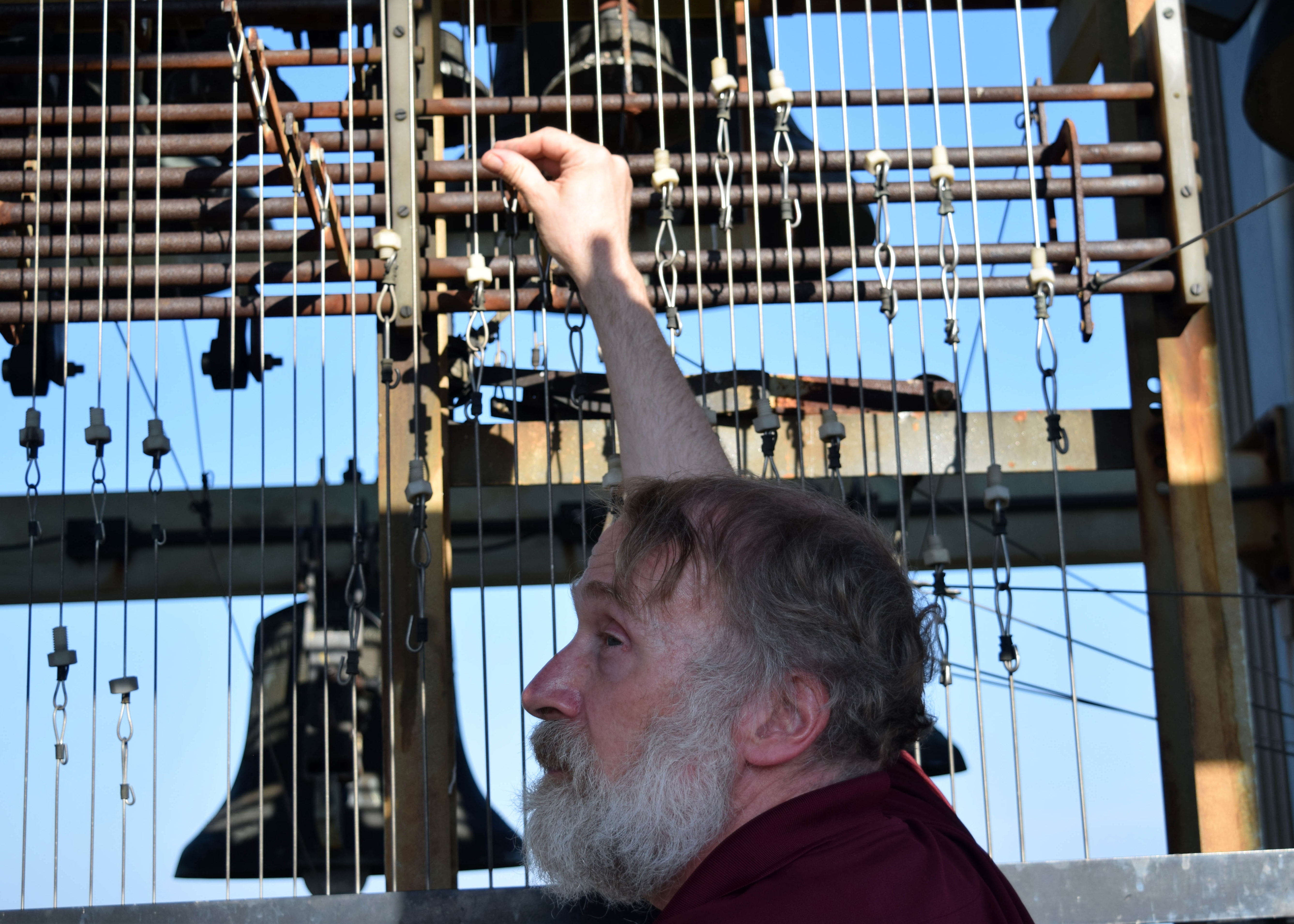 Guest carillonneur John Gouwens shows how the bell mechanisms work on a small tour of the Metz Carillon on Sept. 23, 2017. Gouwens is the consultant for the renovation project for the new carillon.

“Given that the Metz Carillon was built as part of the observance of IU's 150th anniversary, it is fitting that its upgrade and relocation are taking part in conjunction with the university's bicentennial,” said IU President Michael McRobbie in a speech in April 2019 about the new carillon.

Over 50 years, the original Metz Carillon deteriorated due to weather and other conditions, according an IU press release. It was dismantled in October 2017, and the 61 bells were sent to the Netherlands to be retuned and refurbished at the same foundry where four new bells were commissioned for the new grand carillon.

Why did they move it to a new location?

The original Metz Carillon was located at 17th Street and Jordan Avenue, a low foot traffic area with limited space for audience seating.

Stewart said the original location was where officials thought IU’s campus would expand over the years with the construction of additional buildings, but that ended up not being the case.

“The old carillon was not effective and not in a good place,” he said. “It was at the highest point on campus, but it wasn’t a destination. This project wanted to bring the carillon to a more grand location at the center of campus.”

The new carillon is located in the Jesse H. and Beulah Chanley Cox Arboretum, located off of 10th Street near Wells Library and Hodge Hall.

What’s different about the new carillon?

Apart from the new location, the addition of four new bells makes the structure a grand carillon, one of less than 30 in the world.

Each of the bells in the carillon are inscribed with quotes about music from American and English authors, but the original bells neglected to include any quotes from women writers.

“One thing that encourages the heart is music. Throughout the ages we have created songs to grow on and to live by. We Americans have created music to embolden the hearts and inspire the spirit of people all over the world.”

~ Maya Angelou, from Letter to My Daughter

How big are the bells?

The bells range in size, with the smallest having a diameter slightly over six inches to the largest being a couple inches shy of Shaquille O'Neal's height in diameter. The largest of the bells is the new bell featuring the quote from Sappho, which weighs 12,152 pounds.

How do you play music on it?

Music from the grand carillon can either be pre-programmed or played live by a musician using the keyboard setup in the tower’s playing cabin. The cabin, which is 51.5 feet above the ground, is roughly the size of an IU faculty office at 148 square feet.

For the inaugural ringing on Jan. 20, Jacobs School of Music students will play the alma mater on the instrument live.

What are your thoughts on the carillon? Write to us at letters@idsnews.com.