IU students still face thousands of dollars of damages from a house fire they didn’t cause.

IU students still face thousands of dollars of damages from a house fire they didn’t cause.

Anabelle Conley scrolled through TikTok just after 9 a.m. on Jan. 27. She was still sleepy after a late night out the day before and sat in bed, dressed in pajamas. An employee from her rental agency was downstairs trying to thaw out frozen water pipes. The house was quiet. Her other roommates were still asleep in their beds.

Conley, an IU senior, had let the worker into the house. Normally, she wouldn’t have been awake this early, but she said she’s glad she was. Otherwise, she says, she doesn’t know what would have happened next.

One of Conley’s roommates and IU senior, Jordan Lyman, remembers waking up that morning to a strange scent.

“Do you smell that?” she asked her boyfriend who was there at the time.

“Someone probably just burned toast or something,” she remembers him replying.

But Lyman said the smell kept getting stronger and stronger.

Still in her room, the smoke billowing in from the bathroom shifted Conley’s attention away from her phone. She said, at first, she couldn’t believe it was a fire but ran after the maintenance man just in case. She then started evacuating everyone else in the home.

“Every minute mattered for this situation. Getting everyone out of the house in and of itself was really scary and traumatizing.”

She had run through the house shaking everyone awake as quickly as she could. She remembers how fast everything changed, and the disbelief that fell over the group on that morning in January in the 20 degrees Fahrenheit weather.

Less than five minutes after Conley first saw the smoke, her roommates were lined up in the street. Still in their pajamas, the group watched the fire spread through their home.

“We're all sobbing on the street, in slippers, crying and calling our parents,” Conley said.

The house the students had waited to live in was now covered in a cloud of gray smoke.

And they didn’t know why.

Now, more than a month later, the house sits empty. This was a home the residents planned to move into for years. They signed a lease back in 2019, in preparation to take over after a group from their sorority had left.

The marks of fire are long gone, and the residents have moved to a new location. In their new house, the students had been sharing beds with one another for some time after the fire to find a sense of safety. 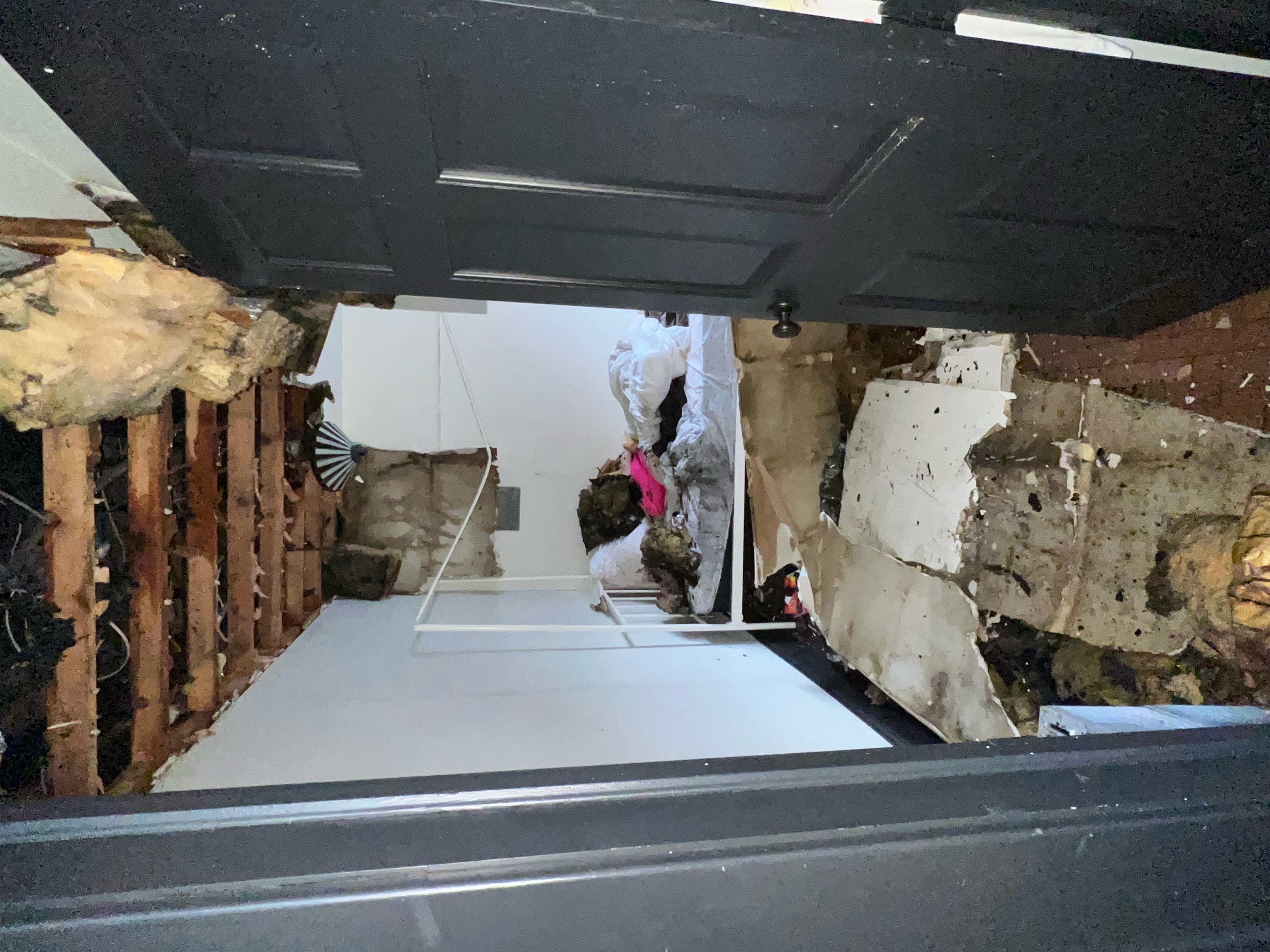 One of the residents' bedroom is shown following the Jan. 27 fire.
Some of the damages occurred after the Bloomington Fire Department extinguished the fire and had to inspect all parts of the house for possible fire.

As for how the fire started, the Bloomington Fire Department reported that the employee from Chickering Rentals, started the fire accidentally when using an air heater to thaw the frozen pipes. The residents say they are still trying to salvage some of what they had in the home and have only received roughly $600 in compensation from Chickering Rentals. However, since the tenants did not take out a renter’s insurance policy, their items were not protected — regardless of how the fire started.

Chickering Rentals said in an email that they could not currently comment on the situation due to ongoing discussions between insurance companies.

Conley said the fire came in addition to a number of issues they already had with the company.

“We just had small maintenance issues at first,” Conley said thinking about the first few months at the home.

It was a stopped shower one day, then a locked basement door the next. But the issues continued and finally reached a boiling point when the group filed a maintenance request to fix the heat in their home. When Chickering Rentals sent a worker to fix the issue, he said the residents’ furnace filter had been left unattended for so long, it could become a fire hazard.

After hearing this, roommate Jordan Lyman drafted an email to send to their rental company on Jan. 26. She explained this was just one of many issues the group dealt with in the house and did not want to see other tenants treated in a similar way.

“However, the maintenance man said the amount of filth was very concerning because it can lead to a fire hazard and dangerously poor quality of air,” the email read.

Later that day, Chickering Rentals property manager Lyndsi Thompson responded to the email with an apology, explaining that the house had two furnaces and their maintenance staff had forgotten the second. She assured the residents they would check all filters in May.

Conley was pacing back and forth on her front porch as the smoke slowly seeped out of her home, as seen on the recording from her front door camera. She was still in her fuzzy slippers and robe in the cold January weather. One hand was clutching her phone, while the other was held over her mouth. She listens and nods, but there’s not much else she can do. Her roommate and IU senior Stella Garland, who she has known since high school, was talking to the maintenance man sent from Chickering.

“We’re getting everyone,” she says to him.

“Is anybody injured?” a dispatcher asks on the other line with the man, who is breathing heavily before he responds.

By the time the Bloomington Fire Department extinguished the remaining flames, the fire had already traveled quickly from the basement stairs and into the attic. The older design of the home was in part to blame for the speed of the fire that had been traveling inside the walls. The majority of the damage had been done not even an hour after the maintenance man knocked on the front door.

Conley and her five other roommates’ minds traveled immediately to what had been left in the house. Garland was thinking about the letters from her twin sister that were still in her room. Her roommates thought of the photos from their families. They have since recovered these items.

Ring doorbell camera footage of the firemen at the back of the house.

The maintenance man said in interviews with investigators that he was using a new air heater to thaw the frozen pipes and he had been using that device for the first time that morning. The device was capable of reaching temperatures upwards of 640 degrees Fahrenheit. He said he left the heater to check the faucets for about 10 minutes when Conley noticed the smoke filling her room.

In addition, the employee had attached metal to the front of the heater, fashioned in such a manner to help the pipes thaw quicker.

The air heater, a Dyna-Glo Kerosene Forced Air Heater, comes with many warnings to the user urging them never to leave the device unattended. The manufacturer also stressed the dangers of rigging any additional systems to the machine in the second page of the product’s manual.

“NEVER use duct work in front of or behind heater,” the manual reads.

Bloomington Fire Department fire investigator, Tom Figolah, was able to definitively identify the cause of the fire as the heat produced by the air heater that the employee used.

“Upon completion of the investigation, it has been determined to be an accidental fire caused by direct and/or indirect heat transfer from the turbo heater and attached metal ductwork pipe to the surrounding combustible materials,” Figolah said in the report.

The initial investigation has not been updated since its filing in January.

“This is, right now, the final say on it,” Figolah said. “We haven’t come across any evidence that would make anything change as far as the cause and origin of the fire.”

A house managed by Chickering Rentals sits empty March 3, 2022, after an employee of the rental agency accidentally started a fire Jan. 27. The tenants, a group of IU students, said their combined losses totaled up to thousands of dollars between the six of them.

Following the fire, the residents spent a brief period of time at the Graduate Hotel before relocating to another house. During that time, they said the Chickering property manager asked them to start compiling a list of all the items they had lost to the fire. The women began taking inventory of all their possessions that had either been destroyed or damaged due to smoke. The residents said the list of items totaled close to $60,000 between the six of them. Under the impression that Chickering Rentals would reimburse them for their losses, some of the residents had already started repurchasing their items.

But a couple weeks later, Lyndsi Thompson returned with a different outcome. She said while Chickering would be able to reimburse them for the costs to launder their smoke-filled clothes, they would not receive compensation for other items lost in the fire. The company cited section nine in the lease the tenants had signed in 2019.

“Tenant agrees to waive any and all claims against Landlord for or on account of any personal injury sustained, or any loss or damage to property caused by fire, water, deluge, overflow or explosion, no matter how it shall arise or be caused,” the lease read.

The tenants, now living in a new home, say they are disappointed with how the situation had been handled both before and after the fire. They wish they had known more before signing the lease and spoke out sooner about the problems they saw with their rental company.

Resident and IU senior Sasha Rosenberg said even with the limited compensation they received, the time they will no longer have in the house is not replaceable.

“Their lack of compassion and empathy is so frustrating for all of us.”

Each morning, the students wake up in what they have learned to call their new home. If they take a look out of their windows they can see the tan exterior of their house that went up in smoke just over a month ago.

They see the home they waited years to move into. The home that had been passed down from older sorority sisters. The home they thought they would end their college years in, hollowed out and dark.

And it’s not even a block down the street.