A dreamscape full of fairies, mice and a beloved Nutcracker doll: ‘The Nutcracker’ returns to the stage

Piles of presents, wrapped in bright colors and tied up in bows, rest at the base of a Christmas tree adorned with glistening ornaments. A pair of siblings, Clara and Fritz, help welcome their friends and family into their home for a Christmas party.

Drosselmeyer, Clara’s godfather, enters the house with a special gift for Clara: a Nutcracker.

At the end of the party, when Clara goes to bed, she enters a mystical dreamland full of mice, fairies and sweets. Enchanted by the ballet dancers, she makes her way through the Land of the Snow. 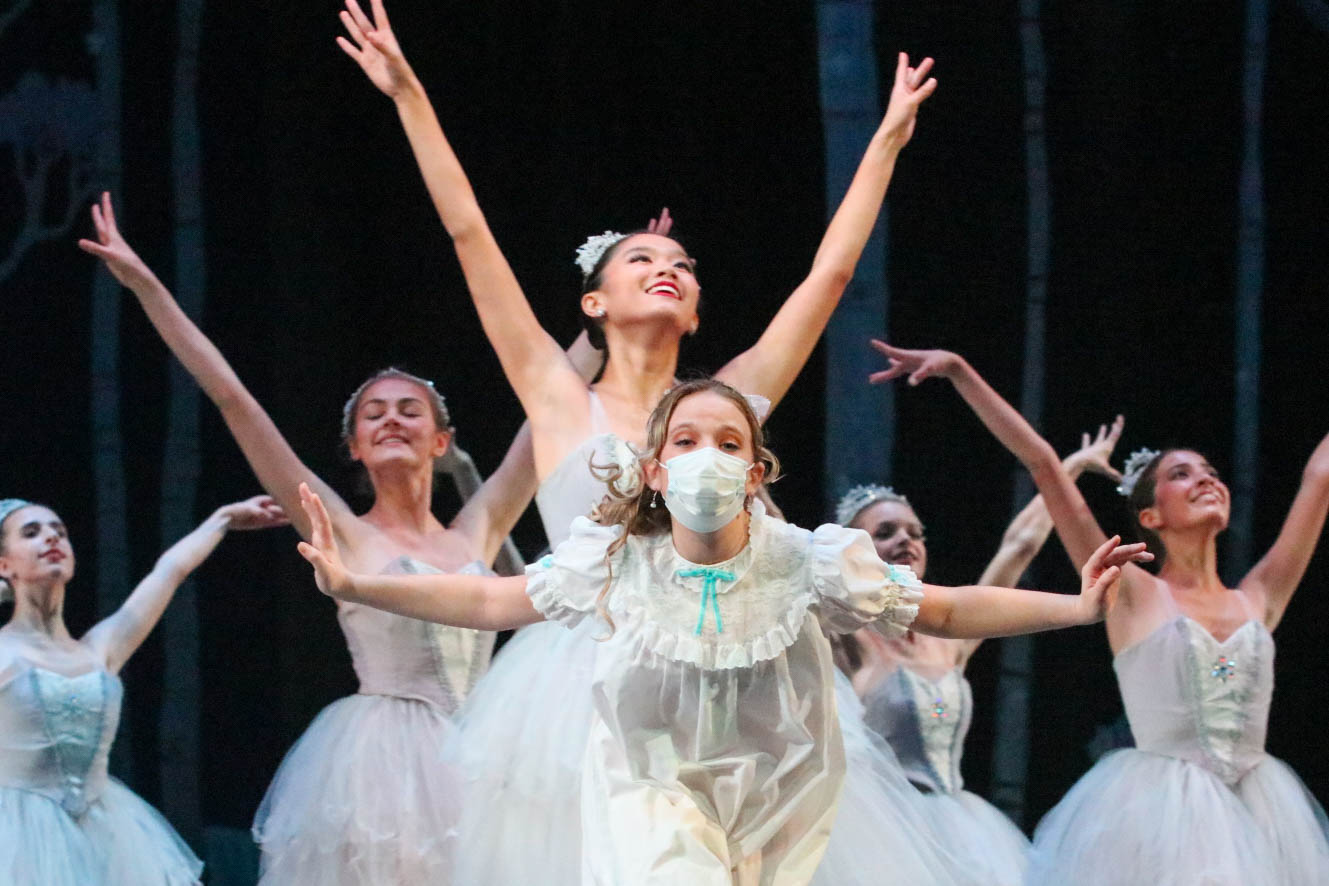 A young dancer portraying Clara performs in the snow scene during a dress rehearsal Nov. 29, 2021, in the Musical Arts Center. While Clara is in her dream world, she is guided through the Land of Snow and the Land of Sweets.

As the curtain closes down on Act I, Jaya Dhand, a Jacobs School of Ballet junior, waits in the wings for her entrance.

Dancers shuffle backstage and behind the curtains before they open for Act II. The faint sound of children lining up can be heard just before the angels glide on stage for the opening of the second act.

When Clara enters the Land of the Sweets, she is greeted by the Sugar Plum Fairy and her Cavalier into their land. Clara tells them of her journey and the battle between the prince and Mouse King. The couple then rewards her with a series of dances.

The IU Jacobs School of Music’s ballet department will perform “The Nutcracker” on Friday through Sunday. The show has not changed much over the years, Michael Vernon, Professor of Music and 2021 Nutcracker choreographer, said.

The Sugar Plum Fairy, portrayed by Dhand, is a lead female role in the Nutcracker.

In the 2019 production, Dhand was an understudy for the Sugar Plum Fairy, which is what she described as an opportunity many freshmen do not receive. Having already rehearsed the role that year, she said it feels like she is revisiting it now.

Dhand, 22, is the oldest in the third-year class. After her senior year of high school, she was accepted into the ballet program at IU. However, she decided to take two gap years to complete a traineeship at the Pacific Northwest Ballet in Seattle.

Dhand decided to take those gap years after a conversation with the ballet department chair Sarah Wroth. Dhand said Wroth encouraged her to complete the program, and that the ballet program would be happy to have her whenever she decided to attend IU.

VVernon said the IU production of “The Nutcracker” is of a professional level and caters to audiences from both Bloomington and around the state. A reason why the show is so common for ballet companies to put on is because the music and story are so well known, he said.

Vernon said another reason the show is popular is because of the amount of children the show has. The show has about 30 children cast in various roles. All of the children in the production are from the Jacobs Academy’s Ballet Pre-College Program. The Ballet Pre-College program is an after-school program put on through the Jacobs School of Ballet for dancers up to 18 years old. 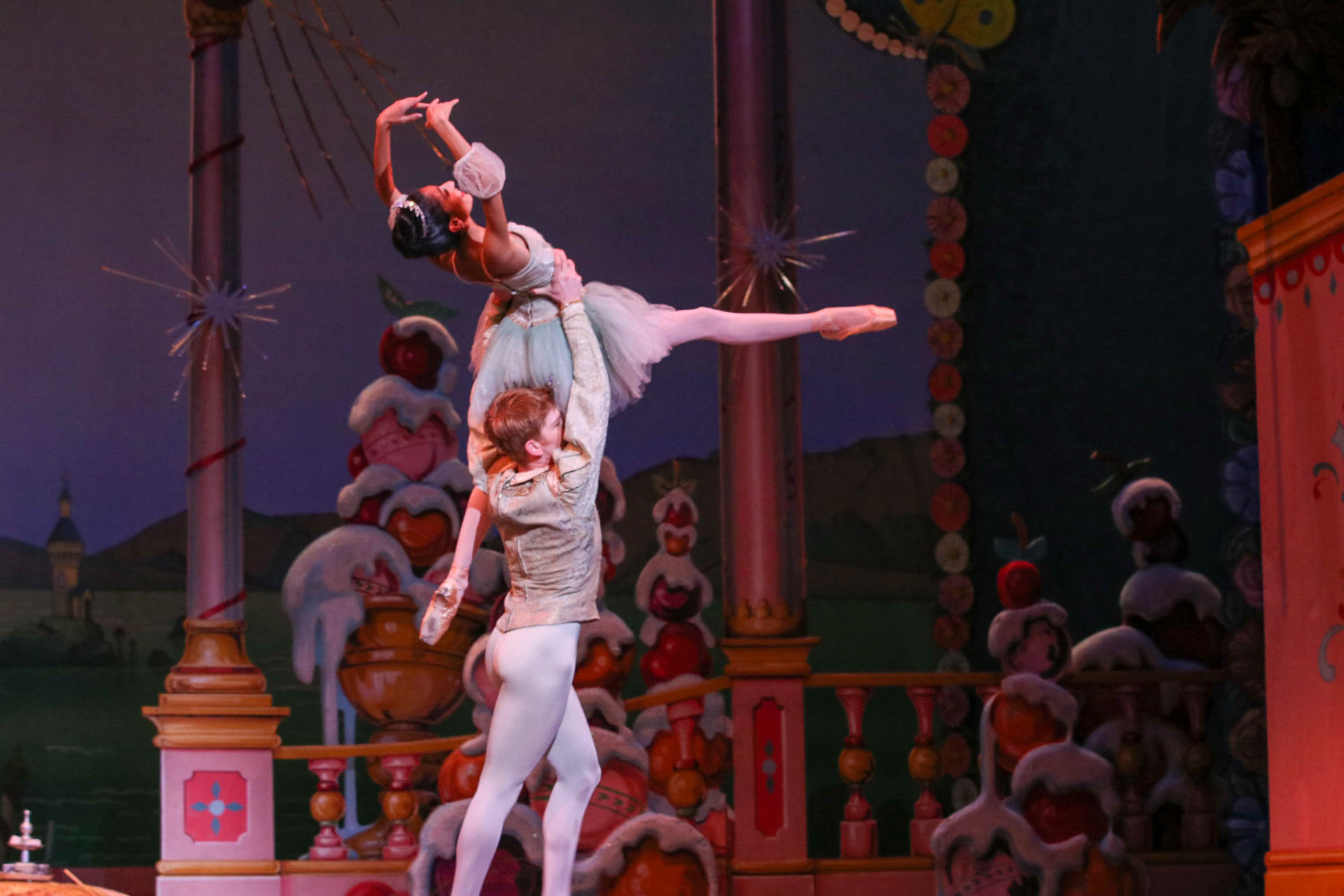 IU senior Jack Grohmann lifts junior Jaya Dhand in the air Nov. 29, 2021, in the Musical Arts Center. Grohmann and Dhand are one of the multiple casts for the Sugar Plum Fairy and her Cavalier. The show has multiple people casted for each role to allow dancers to have the opportunity to dance principal roles and to allow for understudies. 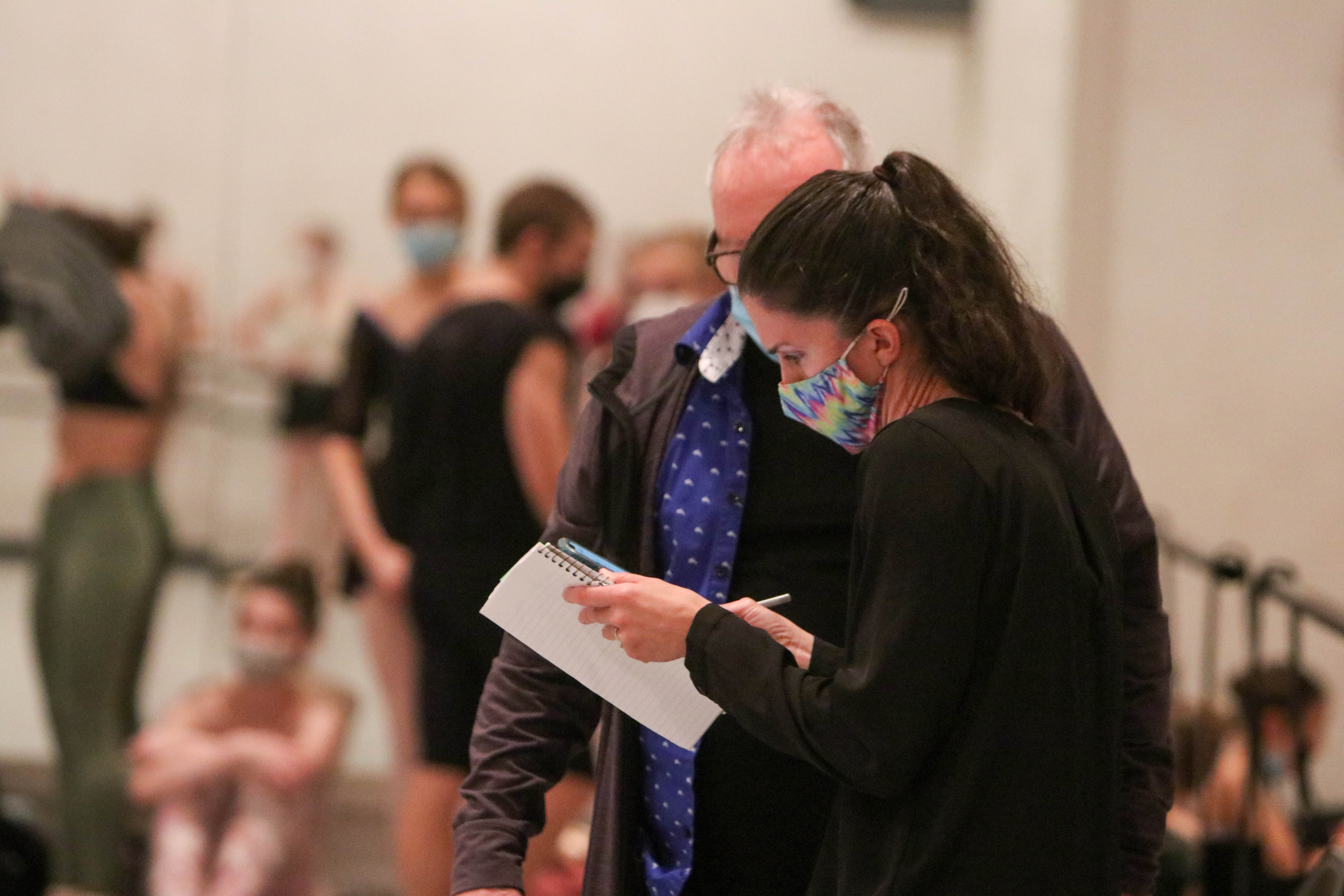 Sarah Wroth, IU ballet department chair, speaks with Michael Vernon, Professor of Music and choreographer of this year’s Nutcracker, during a rehearsal Nov. 17, 2021, in a ballet studio in the Musical Arts Center. Wroth said the professors within the department each took a portion of the show to focus on during rehearsals. 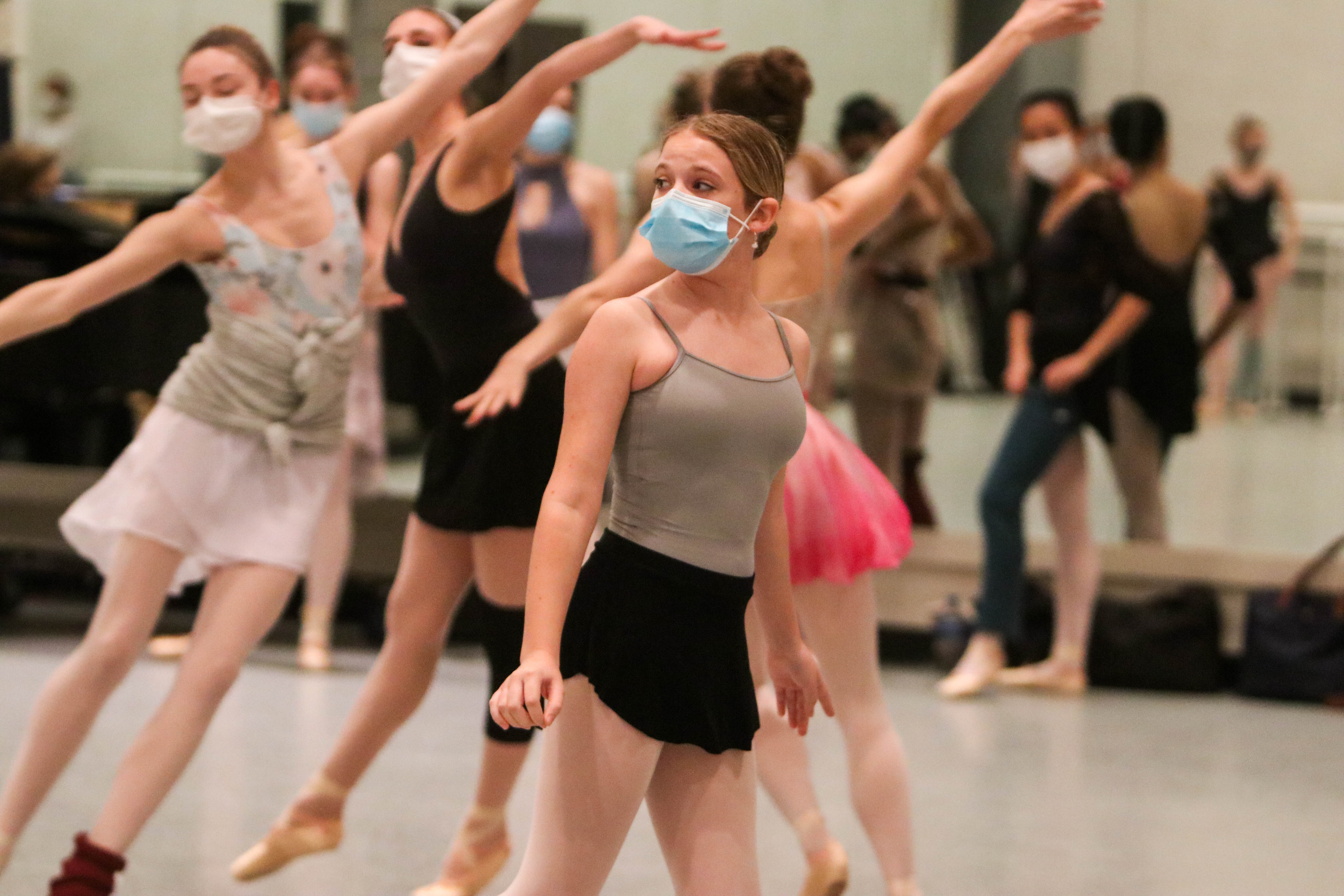 One of the Clara’s performs during a run through during a rehearsal Nov. 17, 2021, in a ballet studio in the Musical Arts Center. All children casted in the show are from the Jacobs Pre-College Ballet program. The program is designed for children ages 7 to 18 and allows for them to receive ballet training after school from IU faculty and students. 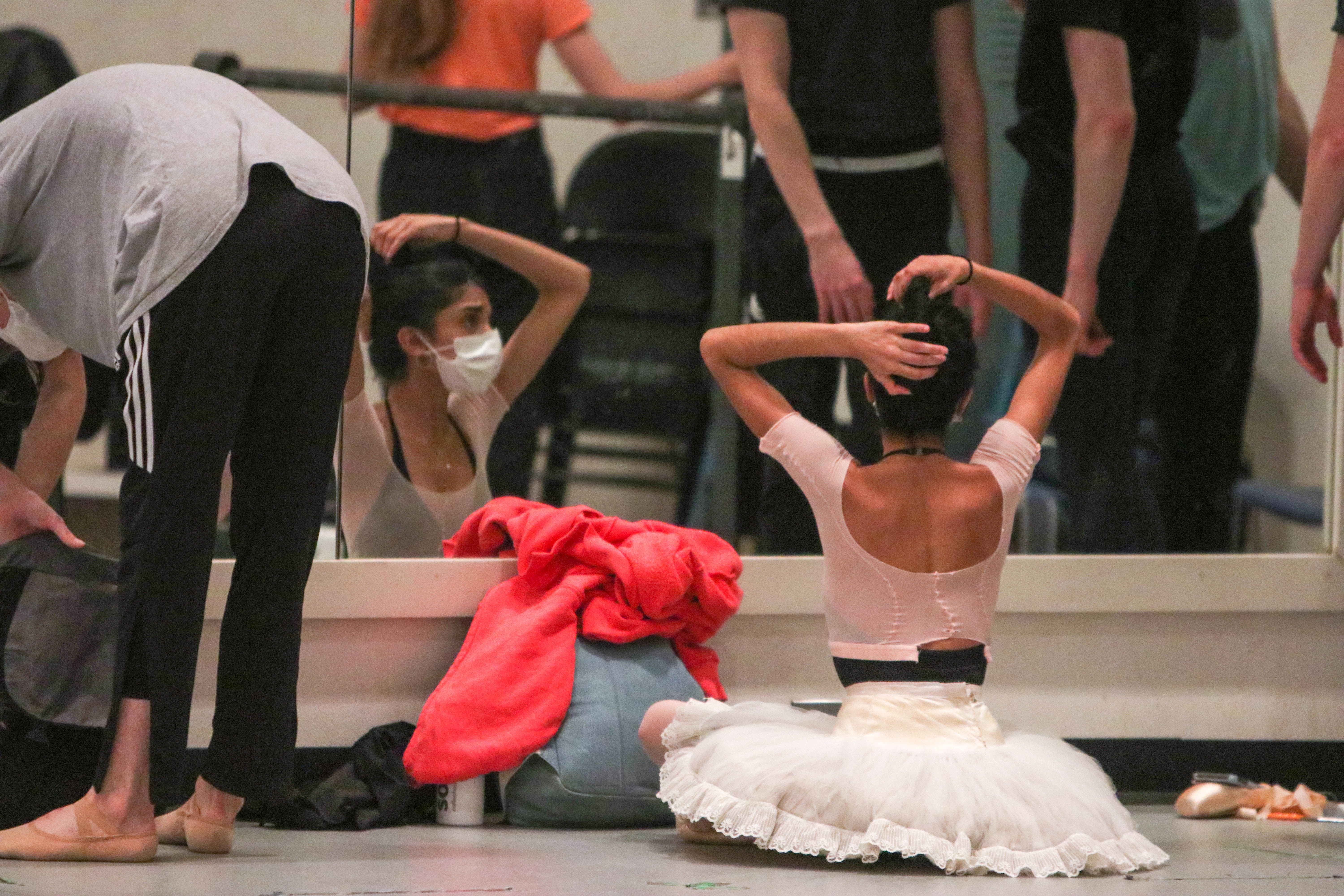 IU junior Jaya Dhand fixes her hair between rehearsals Nov. 17, 2021, in a ballet studio in the Musical Arts Center. Dhand took a two year gap between high school and college to do a traineeship at Pacific Northwest Ballet in Seattle. 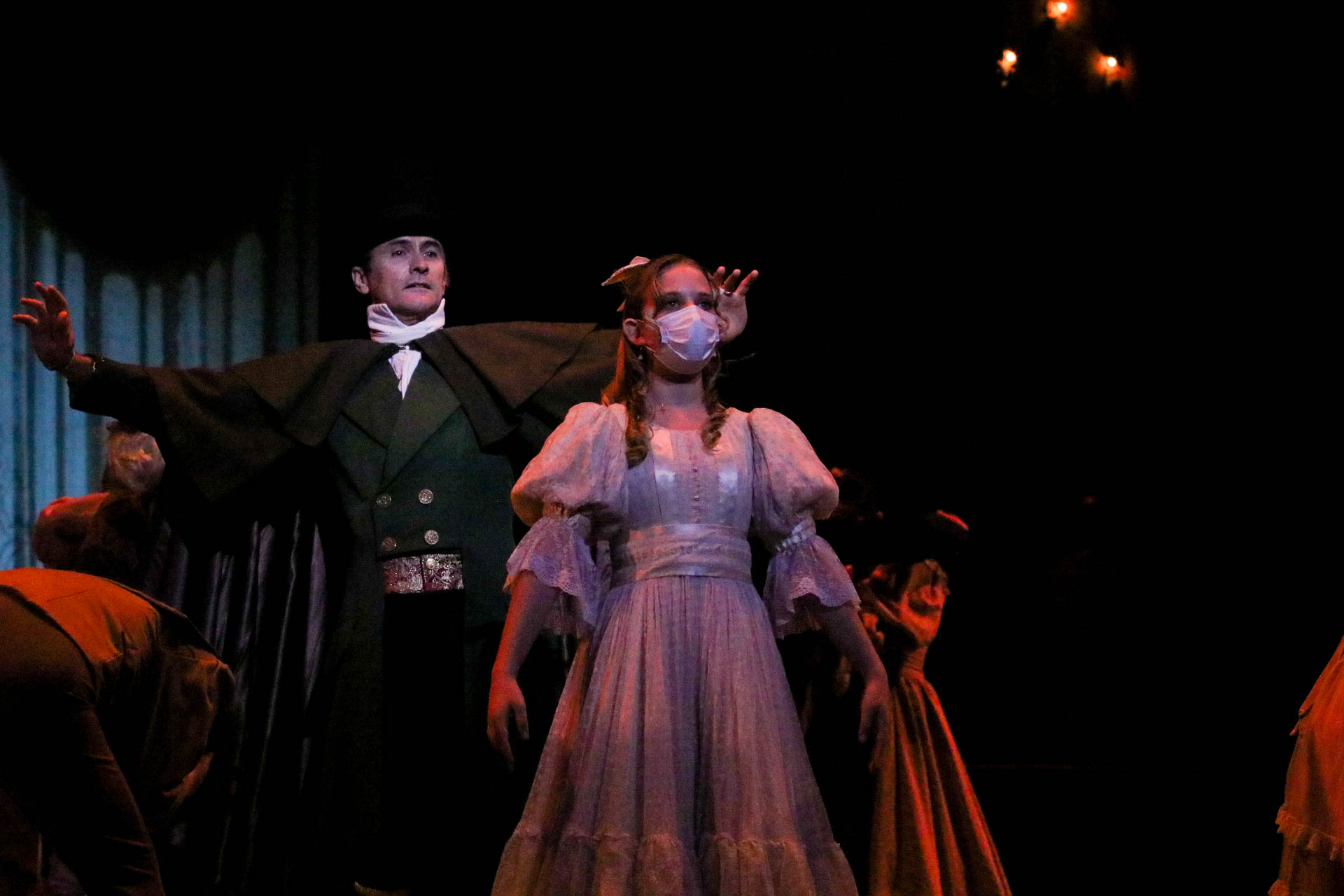 A man portraying Clara’s godfather and a young girl playing Clara perform during a dress rehearsal Nov. 29, 2021, in the Musical Arts Center. The Nutcracker story follows the tale of a young girl entering a dream world full of fairies, mice and sweets. 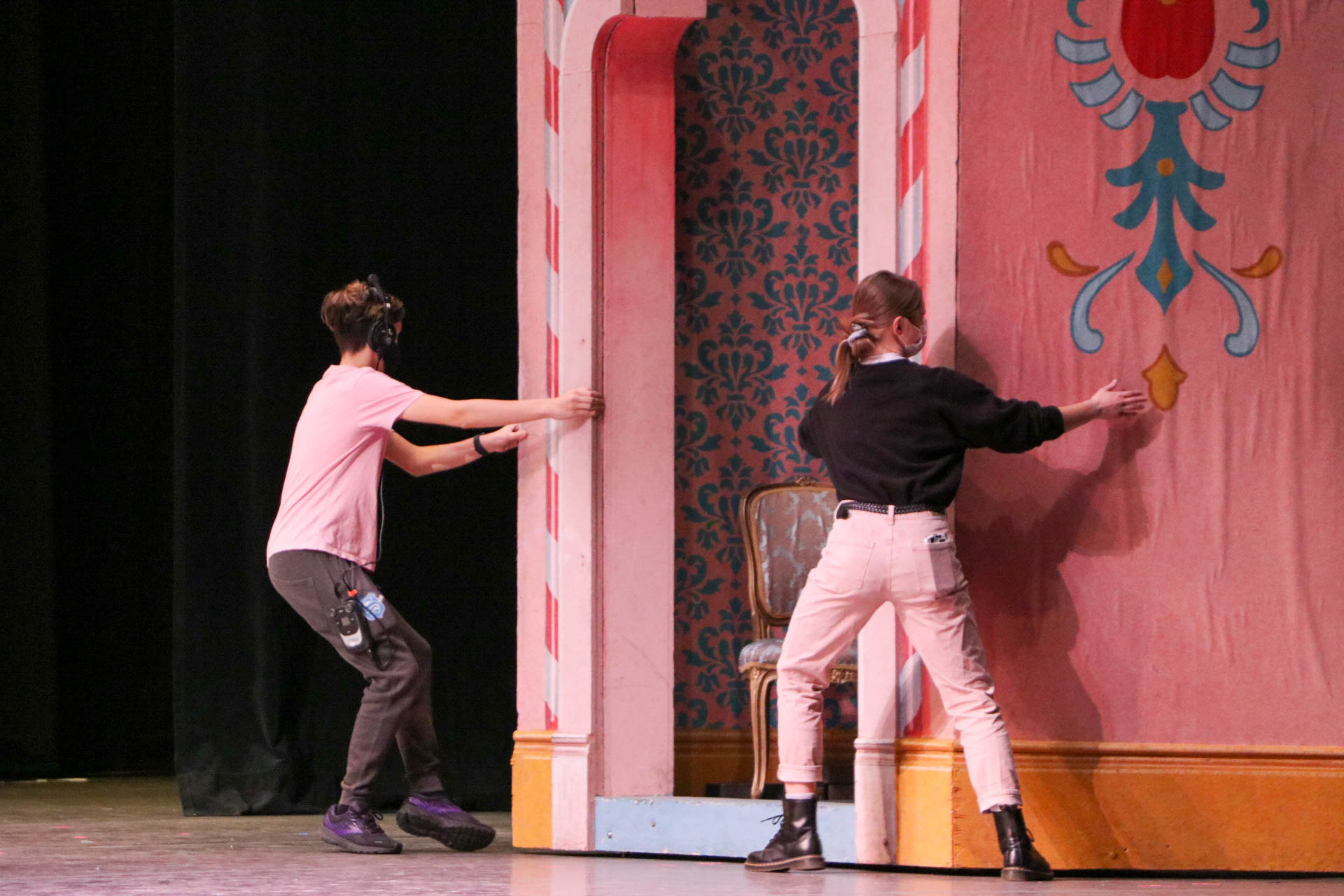 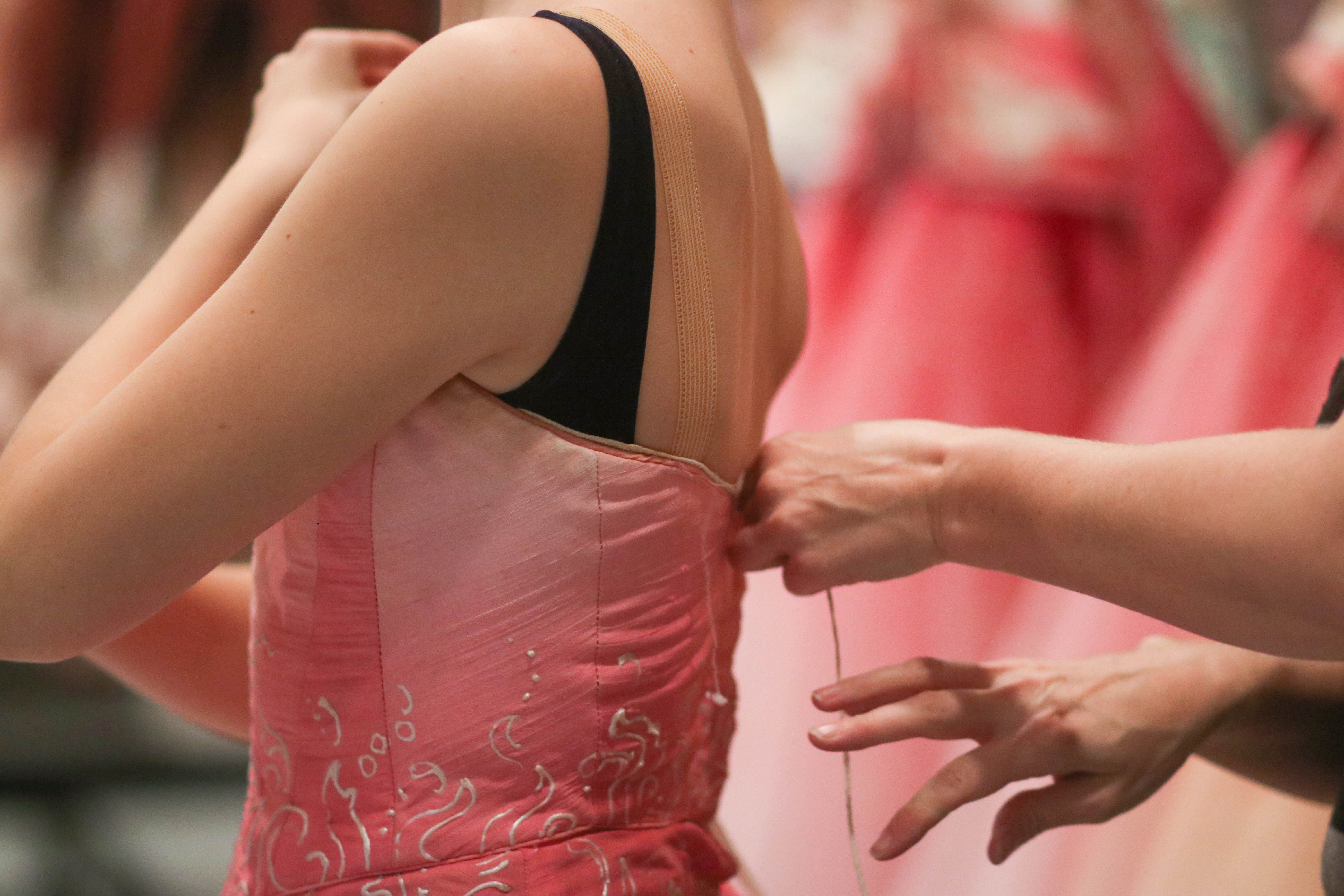 A woman from the wardrobe department moves the straps of a costume to size them Nov. 17, 2021, in the Musical Arts Center. The costumes for this year’s Nutcracker are the same as the costumes used in the past. 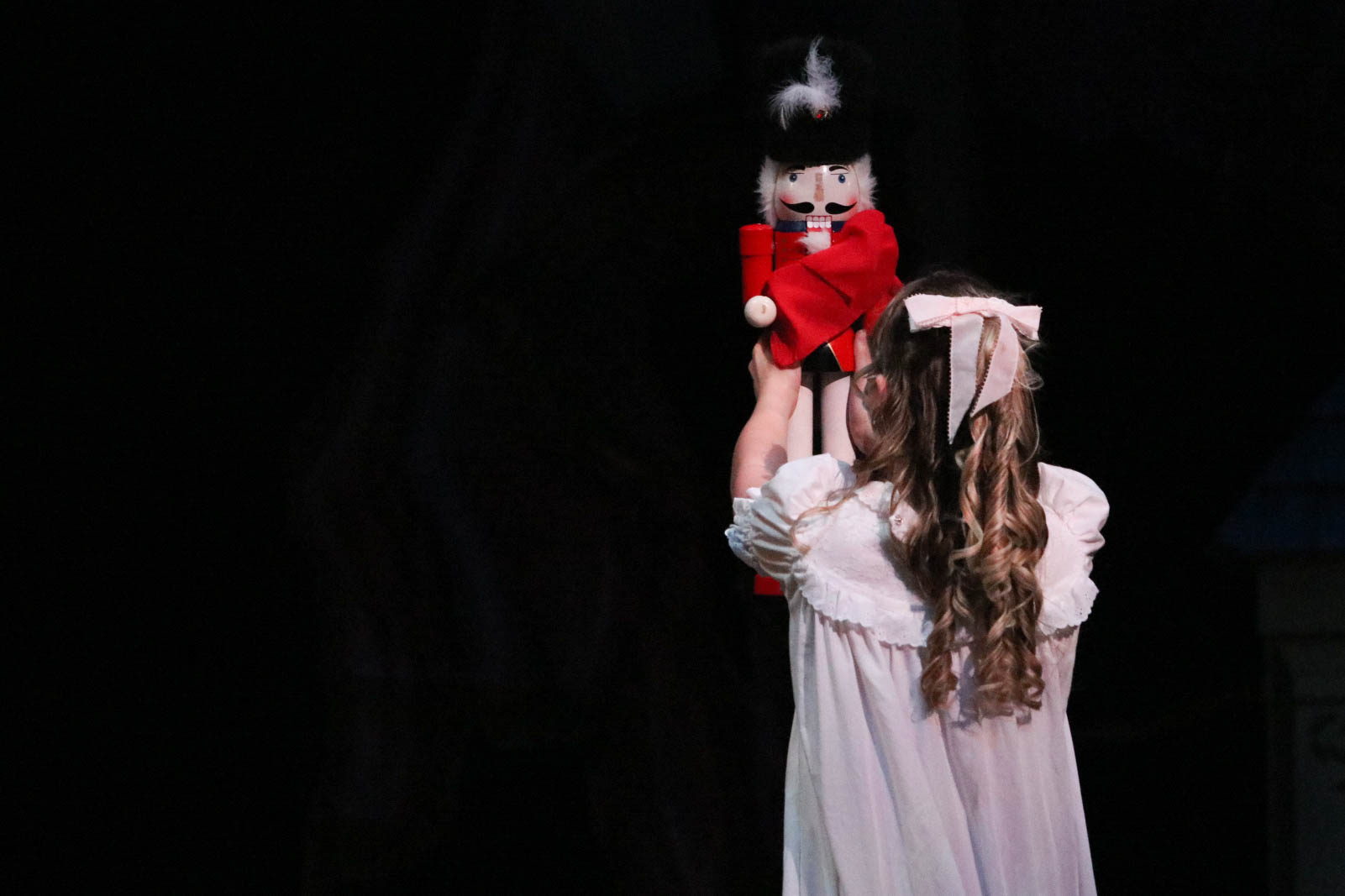 A young girl playing Clara holds up a Nutcracker during a dress rehearsal Nov. 29, 2021, in the Musical Arts Center. There are approximately 30 children cast in the show, IU ballet department chair Sarah Wroth said.
❮ ❯

Throughout Act II of “The Nutcracker,” the Sugar Plum Fairy is accompanied by her male counterpart, the Cavalier. The Cavalier is a role many male dancers aspire to have in this production, IU ballet senior Jack Grohmann said.

Grohmann started ballet when he was 13 years old, later than some of his colleagues.

In most professional ballet companies, dancers will keep the same dancing partners so they can become familiar with one another. Vernon said dancers rotate their partnerships at IU for teaching purposes. He said this methodology helps dancers become familiar with different body types, styles of dancing and personality types.

Dhand and Grohmann have danced together in class, but this is their first time performing together in lead roles. The pair originally met in 2016 at the Boston Ballet School summer program. 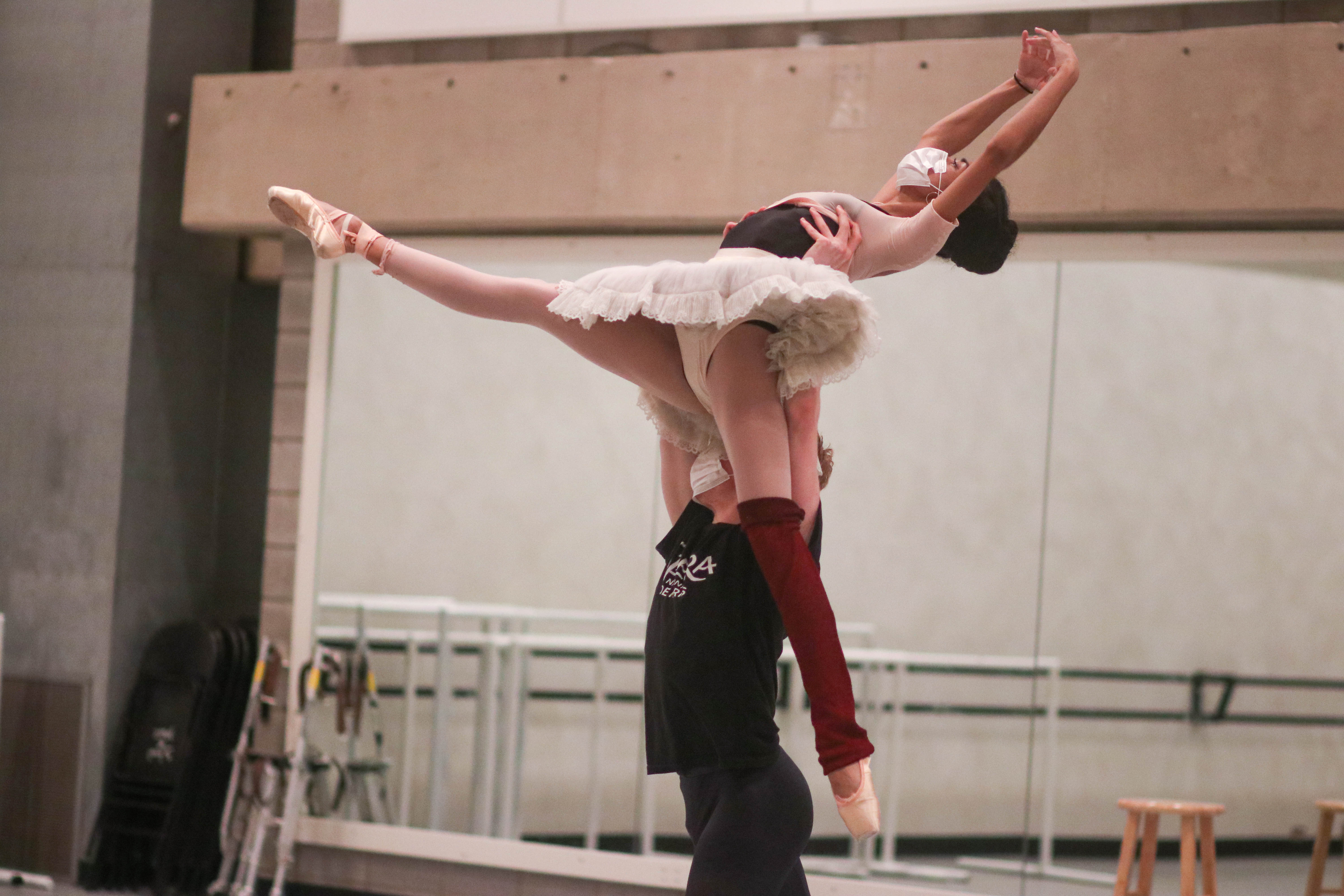 IU senior Jack Grohmann lifts junior Jaya Dhand in the air Nov. 17, 2021, in a ballet studio in the Musical Arts Center. Grohmann and Dhand are one of the multiple casts for the Sugar Plum Fairy and her Cavalier. The show has multiple people casted for each role to allow dancers to have the opportunity to dance principal roles and to allow for understudies.

The same costumes and sets that will be used this weekend have been used since 1998, Wroth said. While everyone may know what the costumes are going to look like, Grohmann said it is still special to know he will get to be the one wearing it.

“The Cavalier costume is something that I know what it is and what it looks like,” Grohmann said. “But to see it next to my name and putting that on for me was really cool just because it's something that I feel like I've been waiting for.”

Wroth said people come to see “The Nutcracker” year after year because it brings the audience back to their childhood. It is easily accessible and since people understand the story, she said, it helps eliminate some of the intimidation of going to the ballet. .

“I think there’s the perfect combination of artistry and the talent of the next generation of dancers all coming together on the stage.""

The show incorporates several student groups to pull off the production. During the Land of Snow scene, a choral ensemble performs on stage and a student orchestra performs the music, Wroth said.

Every role in the show has multiple casts, with some having more than others depending on the role, Vernon said. Having multiple casts provides dancers with more opportunities to dance principal roles and also allow for the use of understudies, if needed.

Having multiple dancers portray the same role also allows for a slightly different variation of the part should an audience member want to come multiple times in the same year.

“As different as we are as people, the interpretations of different roles can be different,” Wroth said.

Last year, IU did not put on “The Nutcracker” due to the pandemic. Vernon said not having it last year makes this year even more special.

“In a way, absence makes the heart grow fonder,” Vernon said. “After not having done it for a year, people are putting even more heart and soul into it.” 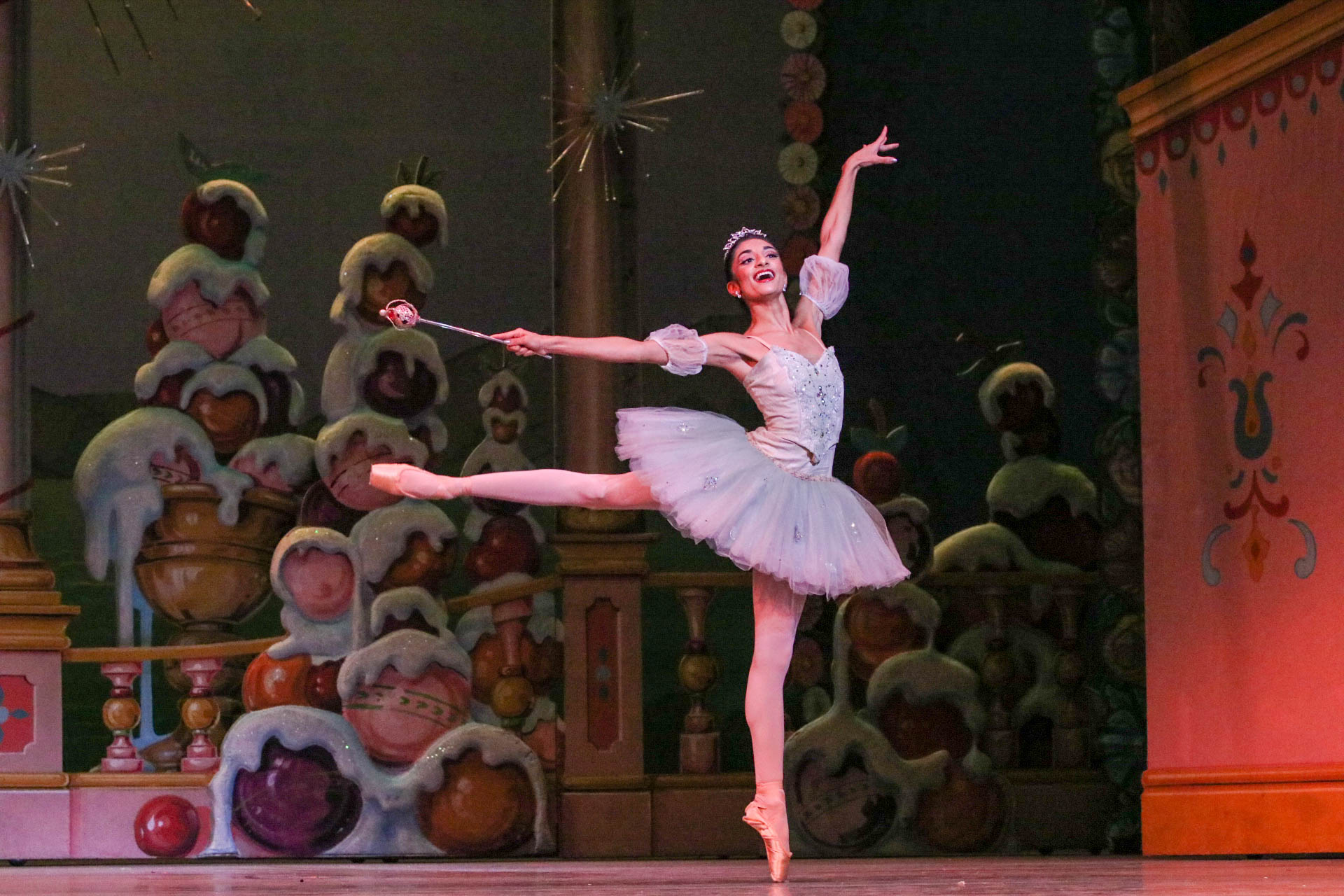 IU junior Jaya Dhand goes up into an arabesque Nov. 29, 2021, in the Musical Arts Center. Dhand said the Sugar Plum Fairy is a role many ballerinas aspire to get.